"This northwestern region of High Rock contains some of the province's most dramatic terrain, including towering, flinty crags, windswept moors, and narrow canyons. Many folk find the environment oppressive, even threatening."
―Rivenspire Loading Screen[src]

Rivenspire is the northernmost zone of High Rock. It is a gloomy region, with jagged rock formations rising out of the bleak, desolate lowlands. Rivenspire is home to many aggressive creatures and wildlife, including wolves and giant bats. Local hunters make a living off of the creatures.

Rivenspire is ruled by a triumvirate of noble houses, which have ruled the region since the events of Ranser's War. The three houses are Tamrith, Dorell and Montclair, and the three generally mistrust each other. Because of this, Rivenspire could be considered in a state of cold war.

Tamrith's holdings are primarily in the Eyebright Feld region in the southwest. which also contains the city of Shornhelm. House Dorell and Montclair's homes are in the foggy, northern region of Boralis. The southeastern region of Westmark Moor has no major settlements other than Hoarfrost Downs, but it does contain the legendary Crypt of Hearts.

Rivenspire is also home to one of the headquarters of the Mages Guild, located in Shornhelm. The region is also plagued by Bloodfiends.

Rivenspire is and has been home to many races throughout history, though it is predominantly inhabited today by the Bretons. A lost Redguard tribe known as the Horsemen once settled near the western coast.

Others have inhabited the region in generations past. Ayleid ruins still dot the land, including the mighty mountain-tower known as The Doomcrag, the tallest peak in Rivenspire and possibly High Rock. While the mountain itself was not created by the Ayleids, it contains the ancient city of Erokii.

There is evidence in the wilds outside the city of Northpoint that giants once migrated to the region. However, they can no longer be found anywhere in Rivenspire; legend speaks of the "trammeling of the giants" long ago. Northpoint itself wasn't established until the 9th century of the First Era, when a Breton trader formed the settlement as a resting point for merchants traveling along the trading route between Daggerfall and Solitude.

House Tamrith has holdings primarily in the western Eyebright Feld region and in the city of Shornhelm, and it was their thriving trade with the lands to the south that led to strong ties with Wayrest. The rivalries between Tamrith and other houses of Dorell and Montclair date back to the late First Era, and each of the houses helped the region in their own way. House Dorell are the descendants of Northpoint's founder, and have held a barony since the days of Empress Hestra. They even ruled Shornhelm for a long time in the First Era.

For their rivalry and differences, the houses of Rivenspire hold many of the same traditions. Each house keeps its own military force, though in times of war or other emergencies, it is not uncommon for troops from the three houses to join with the Shornhelm Guard to form a single fighting force in defense of Rivenspire. Rivenspire's nobles are known for burying their dead beneath Westmark Moor (except for monarchs, who are all buried in the great cemetery of Cath Bedraud in Glenumbra).

During Ranser's War in 2E 566, Ranser, the then-king King of Shornhelm, led the nobles in the region to war against Wayrest due to Emeric's refusal to marry Ranser's daughter Rayelle, cleaning out his coffers for an army of mercenaries in what would ultimately be a fruitless campaign. In the end, the fierce retaliation against King Ranser despoiled Rivenspire, and it is still recovering from the devastating war even fifteen years later. When Ranser was defeated, High King Emeric of Wayrest allowed a triumvirate of the three most prominent houses (Tamrith, Dorell, Montclair) to rule over Rivenspire until he found a suitable replacement to become the new King of Shornhelm. Shornhelm would remain kingless for years as a result of this. Baron Wylon of House Montclair asserted his claim to the throne, being the grandson and sole remaining heir of Ranser's predecessor King Hurlbut, but many seemed hesitant to trust the Montclairs.

A smaller noble house made up mostly of secretive Vampires, House Ravenwatch, remained neutral throughout the war. Although the house prefers to "stay in the shadows," Count Verandis Ravenwatch made a rare public announcement in 2E 582 in which he called for the destruction of the Lightless Remnant, an ancient Ayleid artifact lying at the top of the mighty Doomcrag, a great spire above the ancient city of Erokii, which had been studied unsuccessfully for generations. Verandis believed the Remnant was corrupting Rivenspire's nobility and was causing the region-wide Bloodfiend problem, and he made the artifact's destruction the first priority of his house. 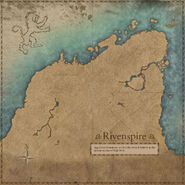 Retrieved from "https://elderscrolls.fandom.com/wiki/Rivenspire?oldid=3071155"
*Disclosure: Some of the links above are affiliate links, meaning, at no additional cost to you, Fandom will earn a commission if you click through and make a purchase. Community content is available under CC-BY-SA unless otherwise noted.