For other uses, see Riverwood.

Riverwood is a small village located in the province of Skyrim. The village is built on the eastern bank of the White River, in Whiterun Hold. It is a small Nordic village set in a valley, between the river and the steep mountainside of the Throat of the World. It serves largely as a stopping point and rural community along the road from Helgen to Whiterun.

Riverwood was founded by the ancestors of Gerdur and Hod, current residents and owners of the village's lumber mill. The village is small, despite the fact that there is a lumber mill, tavern, blacksmith, general goods store, and three log houses and huts with small vegetable gardens. The village is largely self-sufficient, growing its own vegetables as well as hunting and fishing for meat.

Trade is made through the blacksmith and goods store, and what cannot be found locally or bought from travelers passing through may be bought from the Whiterun Marketplace. While the village is walled along its entrances, these walls are not initially patrolled by Hold Guards, and the rural village is largely defenseless. As such, the road to Whiterun is frequented by bandits during the time of the Civil War, and the residents will stay in the town.

Riverwood is most likely the first location visited by the Dragonborn following the attack on Helgen and the escape from Alduin. As such, the small and simple community serves as a tutorial village.

After the events at Helgen, they are directed to either Alvor, had they followed Hadvar, or Gerdur, if they sided with Ralof. The quest "Before the Storm" has them arriving in Riverwood, receiving supplies from the respective source, and being urged to head to Whiterun to inform the Jarl of the return of the dragons.

Riverwood also acts as a significant location and base during the first two acts of the main quest.

The Dragonborn can participate in several local economy and community jobs for the residents, such as chopping wood, milling logs at the mill and smithing basic armor and weapons at Alvor's forge. These activities will allow the Dragonborn to freely take most items from the buildings associated with the resident who was helped, without it counting as stealing. Additionally, Orgnar at the Sleeping Giant Inn has an Alchemy Lab.

Following the quest "Before the Storm," the village can be bolstered with a trio of Whiterun Guards as well as a small camp with bedrolls and a fire with a Cooking Place at the southwest entrance. Otherwise, the village is defenseless discounting its basic walls. Crime does not go unpunished, however, as the residents will attack the Dragonborn should they commit a crime. The residents will accept a yield, but a bounty will be added to Whiterun Hold regardless, and they may refuse another yield following further crimes.

The White River, on which Riverwood is built, is full of salmon. These fish are sought after by the area's hunters, and can be used for food or sold for gold. With the Hearthfire plug-in, salmon leaping up falls also have salmon roe, a valuable alchemy ingredient.

There are a total of sixteen residents (and one dog, as well as chickens and cows) in Riverwood.

Nearby points of interest[] 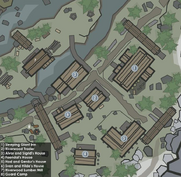 A vibrant aurora over Riverwood

Čeština Deutsch Español Suomi Français Italiano Nederlands Polski Русский Svenska Українська
*Disclosure: Some of the links above are affiliate links, meaning, at no additional cost to you, Fandom will earn a commission if you click through and make a purchase. Community content is available under CC-BY-SA unless otherwise noted.
Advertisement