The Ruby Throne, also known as the Dragon Throne, is located in the Imperial City of Cyrodiil.[1] The Throne plays a special role in The Elder Scrolls Online. When a faction conquers the Imperial City, their highest ranked player will be crowned Emperor of Tamriel. This title may not last forever. However, it will bring special attributes to the "New Emperor" when a player fights in the PvP environment of Cyrodiil. The Ruby Throne has become a symbol for power among the three factions' mission statements. They all view the Ruby Throne as the key to conquering and pacifying Tamriel. [source?]

A card back of the Ruby Throne in Legends 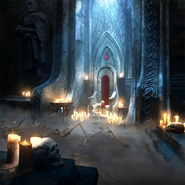