"Despite all my knowledge, Uldor's influence over me was absolute. I'd be little more than a puppet without your timely intervention."
―Rurelion[src]

Rurelion is an Altmer scholar working on behalf of the Aldmeri Dominion. He has been possessed by an undead Maormer wizard named Uldor at the Temple of Mourning Springs during the quest "Tears of the Two Moons." His assistant is Gathwen, who will run for help to save him from his controller.

Rurelion is one of many people who became stranded on Khenarthi's Roost because of the recent storms in the area. After arriving on the island, Rurelion, Gathwen, and Ealcil—another scholar from the Dominion—were told about the Temple of the Mourning Springs by the locals and embarked on an exposition. There, they found an artifact—the Mourning Stone—which can create seemingly infinite reserves of water. After removing the stone, the party was descended upon by numerous undead, scattering them;[1][2] Rurelion was left trapped inside the temple, where Uldor took control of him.

While possessed by Uldor, Rurelion appears to be completely sedated, but resists the Moarmer's control; eventually, he breaks free, showing that he is both strong-willed and determined. In the Great Hall, despite just breaking out of Uldor's grip, he is calm and collected, knowing that he has to maintain a level head in the situation. He is ready to act for the greater good, volunteering to sacrifice himself to keep Eagle's Strand and Khenarthi's Roost safe, and recognizes when others act similarly, calling the Vestige, "friend," if they agrees to his plan. In addition, he shows care towards his apprentice, not wanting her to be trapped with Uldor. He also states that she will be more powerful than him, and that he is proud of her.[3]

Tears of the Two MoonsEdit

Gathwen recruits the Vestige to get Rurelion back, but the two are stopped by a skeleton, who says that Rurelion is under his control; he is later revealed to be named Uldor. After solving the puzzle in the Temple Catacombs, the two find a strange-looking Rurelion; he will state that he is actually Uldor, and that he enjoys the magic that pulses through his new "puppet." Rurelion is being controlled by the Moarmer, and the Altmer's magic is Uldor's edge in summoning more undead. After the Vestige defeats numerous skeletons to stop the ritual, Rurelion begins fighting off Uldor's control, rushing out of the room as they mentally battle.

In the Great Hall, Rurelion can be found at the end, near the stairwell to Uldor's Tomb. He will explain that he has cast the undead sorcerer into the tomb, but the spirit won't be there long. He comes up with a plan to distract Uldor by submitting himself to the Moarmer's control while the Vestige places the Tears of the Two Moons, which Rurelion hands over. He tells that Gathwen should get the Mourning Stone, which will seal himself and Uldor in the tomb forever. When she hears of the idea, she volunteers to be the distraction, and asks that Rurelion be left to get the Mourning Stone instead. The Vestige must choose whether to seal either Rurelion or Gathwen inside the tomb.

If Rurelion is chosen to be sacrificed, he will enter the tomb first, telling Uldor that he won't fight. After the four stones have been placed on their consequent pedestals, Uldor will temporarily be silenced, allowing for Rurelion to thank the Vestige a final time, bidding them farewell. He will be trapped in the temple from that point on.

If Gathwen is chosen, Rurelion will get the Mourning Stone from Eagle's Strand begrudgingly. Once the Vestige emerges from the tomb, he will swear to free Gathwen from Uldor eventually, giving the Vestige the Mourning Bow and a leveled amount of gold.

If Rurelion is chosen to live, then he will offer to fight alongside the Vestige against the Sea Vipers.

Despite all my knowledge, Uldor's influence over me was absolute. I'd be little more than a puppet without your timely intervention.

Are you hurt? Only my pride. But we have a more pressing matter. As Uldor sensed my thoughts, I could sense his. He plans to overwhelm and enslave Khenarthi's Roost with an undead horde by the next dawn!

How is that possible? Uldor was a powerful Maormer wizard who learned to separate his spirit from his body, even in death. He can "wear" hundreds of mindless forms at a time. Thankfully, I know his weakness.

What weakness? The Mourning Stone's endless water supply tied Uldor's spirit to his body. When Ealcil removed the Mourning Stone from the temple, he set Uldor free. Once again, Ealcil's sloppy methods nearly cause the death of me.

What does the Mourning Stone do? The center piece of this old Kkajiit temple. After Uldor's reign of terror, the Sea Elves gave it to the Khajiit so it'd become the key to his prison.
Am I in danger of being "worn?" No, which is why we must be the ones to enter the tomb. After he saw you through my eyes, he seemed convinced that to "wear" you would destroy him. For some reason he feared you.
If he can't affect me, I should enter the tomb alone. No, we must enter the tomb together. Though he can't "wear" you, he could quite easily obliterate you with his magic. Only by splitting his attention can we hope to defeat him.
I'm ready to face Uldor.

When Rurelion is spoken to again:

We should hurry. Uldor won't be trapped for long.

Gathwen wants to take your place in the tomb. That's madness. I've experienced so many summers. My greatest accomplishment was watching Gathwen blossom into someone who'll far surpass my own deeds. No, she must recover the Mourning Stone. You and I shall confront Uldor.

I'll seal you in the tomb with Uldor. Then we should waste no more time.

I agree with Gathwen. She'll take your place. Then I'll respect her choice, no matter how much I disagree with it.

I need a moment to consider this.

After defeating Uldor, if Rurelion is chosen to be sealed away:

Go, quickly. I feel Uldor's weakness fade. Hurry, tell Gathwen of the plan's success. But don't mourn for me, friend. I earned a useful fate. Few can say the same.

What will happen to you? Uldor will sustain me. Better a living form than a dusty old skeleton, I suppose. I'd hoped for more time to meditate, but this wasn't what I had in mind. Goodbye, my friend. You're what all in the Dominion should aspire to be.

After defeating Uldor, if Gathwen is chosen to be sealed instead:

We've restored the Mourning Stone. But if you're here, then Gathwen is lost to that monster.

She saved everyone on this island from Uldor. You speak truth, and yet the young should never die for the old. It is the singular travesty of war.

What will you do now? I need to record everything that happened here. Uldor's skill troubles me. Without further study, the Dominion will bear no defense against his strange capabilities.

What about Gathwen? I've rarely encountered a creature of Uldor's power. There may be a way to separate him from Gathwen, but it will take much time and study. She's not just an apprentice, she's my friend. If there's a way to free her, I swear I'll find it.

Complete Quest. Please don't think me ungracious. Without your aid, I'd still be under Uldor's influence. I won't forget. I can open a portal to the temple courtyard, if you wish.

I'd appreciate that. There you are. I'm afraid it won't remain open for long.

Rurelion: "Uldor, I command you! By the Tears of the Two Moons, return to your prison!"

If Gathwen is chosen to be sacrificed:

Rurelion: "Gathwen, I beg you to reconsider."
Gathwen "You're too important, Rurelion. If the Dominion lost you, we could be lost."
Rurelion: "Then I will recover the Mourning Stone! Farewell, my dearest friend."
Gathwen: "Farewell, Rurelion."

Gathwen: "You can't do this, master!"
Rurelion: "The Dominion will thrive without me. It's far stronger than it knows.
Gathwen: "Then I should recover the Mourning Stone. Farewell, Rurelion. I ...."


Rurelion: "I know Gathwen ... I know. Give me a moment to collect myself. I'll be right behind you."

Upon Approaching Uldor (if Rurelion is chosen):

Rurelion: "I've reconsidered what our combined power can do, Uldor. I willingly give myself over."
Uldor: "I knew such power would tempt you. Very well."
Rurelion: "Hurry! Place the Tears of the Two Moons in the pedestals!" 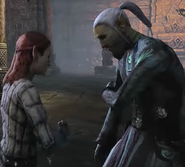 Depending on the choice in "Tears of the Two Moons," either Gathwen or Rurelion will protest it the decision made, resulting in an arguement.

Rurelion as he prepares to be trapped in the temple.
Add a photo to this gallery

Retrieved from "https://elderscrolls.fandom.com/wiki/Rurelion?oldid=3035513"
*Disclosure: Some of the links above are affiliate links, meaning, at no additional cost to you, Fandom will earn a commission if you click through and make a purchase. Community content is available under CC-BY-SA unless otherwise noted.