For other uses, see Sabre Cat.

"The Sabre Cat of Skyrim is a giant, ferocious predator, and will often ambush travelers who stray too far from the roads, and into the wilds."
―Loading Screens[src]

Sabre Cats are large predators found in the mountainous or tundra areas of northern and central Skyrim, especially the open plains between Rorikstead and Whiterun.

They can present a challenge, particularly at lower levels, due to their high damage output and extremely rapid attacks. It is also possible to contract the disease Witbane from them. The quest "Animal Extermination" may require a sabre cat to be killed.

The standard sabre cat has reddish-brown fur which helps it blend into grassy regions. The snowy version of the sabre cat has spotted white fur which it uses more for stalking than its cousin in the plains. Snowy sabre cats are typically found in the northern regions of Skyrim (as well as other snowy areas), especially around Dawnstar and Winterhold.[1]

They occasionally travel in groups of two or three, though they usually travel alone. Once a sabre cat catches sight of prey, it will crouch and slowly move towards it until pouncing at the right moment. Due to their camouflaged coats, they can easily ambush an unwary traveller. They may lurk in nooks under hills just off the road, poised to ambush anyone who walks by. They rarely follow prey into water, so only a river that is deep enough to swim in can be used as an escape route. They are susceptible to Command Animal, and are sometimes summoned by spriggans.

In addition to the standard sabre cat, there is a subspecies known as the snowy sabre cat, which is much stronger and lives in snow-covered areas, like the regions around Windhelm and Winterhold. They can be distinguished from regular sabre cats by their cream colored coat.

A spectral sabre cat, that is also bigger and tougher, and is only encountered in the quest "Kyne's Sacred Trials." It is located on the shore of the Sea of Ghosts near the glaciers' edge.

Dawnguard adds another subspecies, the vale sabre cat, found in Darkfall Cave and the Forgotten Vale. They can be distinguished from the regular sabre cats by their purple and brown mottled coat. 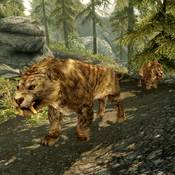