Priestess of Boethiah
Boethiah Cultist
The Sacellum of Boethiah is a Daedric Shrine east of Windhelm.  After Level 30

On approach the sky will slowly turn to night, regardless of whether its day. A scavenger and Troll may be encountered on this road. Many burned bodies are lying around the Sacrificial Pillar meaning that a lot of people have been sacrificed before. The Daedric markings on the pillar translate to "I am alive because that one is dead. I exist because I have the will to do so".

Note:If the Dragonborn visits the location prior to level 30 the quest will not activate, and the location will be empty. 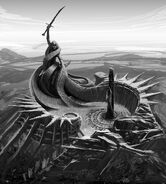 Concept art of Boethiah's Shrine
Add a photo to this gallery

Retrieved from "https://elderscrolls.fandom.com/wiki/Sacellum_of_Boethiah?oldid=1593288"
*Disclosure: Some of the links above are affiliate links, meaning, at no additional cost to you, Fandom will earn a commission if you click through and make a purchase. Community content is available under CC-BY-SA unless otherwise noted.