That Was Always There

Revyn Sadri
Sadri's Used Wares is a pawnbroker shop in The Elder Scrolls V: Skyrim located in the Gray Quarter of Windhelm. The shop is owned by Revyn Sadri, who insists that none of his goods are stolen.

"You should unload some of that unwanted gear. Head over to Sadri's Used Wares, talk to the Elf."
―Windhelm Guard

That Was Always There[]

Revyn Sadri asks for help with returning a ring he believes to be stolen. He tasks the Dragonborn with sneaking into Viola Giordano's House to return the ring.

If the Dragonborn decides to return the gold ring to Viola Giordano without sneaking into her home, she will threaten to tell the Jarl to increase Sadri's taxes. Although angry with the Dragonborn, they can still trade at Sadri's Used Wares.

Revyn Sadri will also train Speech skill after being helped.

The bed will not fit both the Dragonborn and Revyn, but Lover's Comfort will still be received. Revyn will frequent the New Gnisis Cornerclub before coming back home to sleep each night. 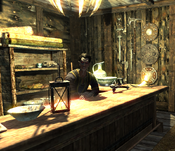