The tomb can be found to the northwest of Seyda Neen There is a shrine to St. Veloth here. There are five undead guardians in the tomb. The loot is pretty good, consisting of a potion, a couple scrolls, and a few ingredients. There is an urn that also contains the Mentor's Ring, the key to Lord Brinne's chest and Lord Brinne's Ashes. 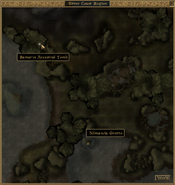 Retrieved from "https://elderscrolls.fandom.com/wiki/Samarys_Ancestral_Tomb_(Morrowind)?oldid=2832420"
*Disclosure: Some of the links above are affiliate links, meaning, at no additional cost to you, Fandom will earn a commission if you click through and make a purchase. Community content is available under CC-BY-SA unless otherwise noted.