For other uses, see Sapphire.

Sapphires are precious gems commonly found in Skyrim. They can be mined from Sapphire Geodes and pickpocketed. Sapphire, a member of the Thieves Guild, carries several of them. After obtaining sapphires, they can be used to smith various valuable rings and necklaces at forges. Sapphires come in three varieties; standard, flawless and exquisite. 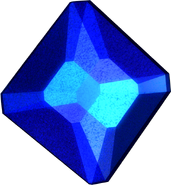 Flawless Sapphire
Add a photo to this gallery

Retrieved from "https://elderscrolls.fandom.com/wiki/Sapphire_(Skyrim)?oldid=3074410"
*Disclosure: Some of the links above are affiliate links, meaning, at no additional cost to you, Fandom will earn a commission if you click through and make a purchase. Community content is available under CC-BY-SA unless otherwise noted.