"Yes. The other twelve follow the circles of heaven, guardians and charges, but the Serpent respects no master. It moves across the heavens, threatening the other constellations in its path. The only way to guide Hayle's soul through the necromancer's snare is to place the starstones in the position of the Serpent's head and tail -- But there's no way to predict the Serpent's path."
―Coyle[src]


Saving Hayle's Soul is the eleventh quest in the main questline in The Elder Scrolls Adventures: Redguard.

Before Coyle will even speak to Cyrus, he must first learn about the tragic death of his brother Hayle at the hands of Imperial guards by speaking with Avik. The old snake-charmer will recount the events, and how N'Gasta's soul snare prevents his mother Saban from completing the Song of Passage required for his soul to pass on to The Far Shores. After gaining Coyle confidence, he will explain that normally this task would be quite easy for a powerful witchmother such as herself, but because Hayle was born under the Serpent, his path is unpredictable. Cyrus can learn more about the constellations, the Guardians and their Charges, from dialogue with Coyle or from the book Ffoulkes Firmament.

Traveling to the Observatory, the eccentric bosmer Erasmo will explain that while he managed to fix the orrey, the telescope remains broken and needs a special gear to function. For information on acquiring the Dwarven Gear, see "The Dwarven Mines".

Returning to the Observatory with gear in hand, Cyrus will be tasked with going down into the gear room itself and replacing the broken cog. An elevator activated by a rectangular button with take him down. Their are two methods of reaching the far-side: The first is to go to Erasmo's room, turning off the steam, heading south from the elevator, following the walkway straight ahead, climbing up and walking around to the other side, avoiding the red-hot pipe and jumping to the platform below. The second way is to drop down from the gap where the elevator is, dropping down again where the swinging pistons are, jumping on top of the first piston and then jumping to the next piston when it swings around. Carefully position Cyrus on the pistons arm to avoid being knocked off, then turn around and he can easily jump up into the final room.

Whichever method is chosen, Cyrus should find a slot to insert the gear, which will activate a nearby elevator taking Cyrus up to the orrey floor. With the telescope now functioning, Cyrus can begin his search of the night sky. If Cyrus has read The Firmament, he may recognize that The Warrior's eyes are lit up, suggesting that The Serpent is threatening one of his Charges. Starring straight ahead across to The Lord, Cyrus can maneuver the telescope to observe The Serpent threatening him. Using the wheel on the back of the platform, Cyrus can move the telescope up and down to get the full view. Noting the rune like symbols associated with the signs, the starchart on the Orrey's ceiling is reminiscent of the circle at the Yokudan camp.

With this knowledge, Cyrus can return to Saban and is now able to confidently pick up the starstones and adjust their position, though cautiously for if Cyrus leaves the circle at anytime, he will put the stones back where they originally were. With the stones correctly placed where the Serpent constellation appears on the chart, Hayle's soul is finally free from the Sload necromancer's snare and the elderly Yokundan sorceress cheers with joy. Coyle thanks Cyrus and offers their help in anyway that they can. Provided that Cyrus has already fully completed The Goblin Caves and Recovering the Soul Gem, he can then proceed to the quest Resurrecting Prince A'Tor. 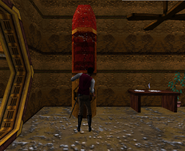 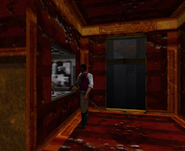 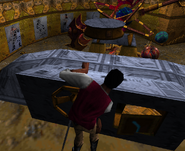 The Lord and The Serpent.

The Serpent (Tail).
Add a photo to this gallery

Retrieved from "https://elderscrolls.fandom.com/wiki/Saving_Hayle%27s_Soul?oldid=3083433"
*Disclosure: Some of the links above are affiliate links, meaning, at no additional cost to you, Fandom will earn a commission if you click through and make a purchase. Community content is available under CC-BY-SA unless otherwise noted.