Finding the Flask of Lillandril

Saving Iszara is a quest in the main questline in The Elder Scrolls Adventures: Redguard.

Cyrus must confront the necromancer N'Gasta and save Iszara's soul from clutches of the Daedra lord Clavicus Vile.

After learning of Iszara's fate from the Mage's Guild acolyte Joto and recovering the legendary Flask of Lillandril, Cyrus must travel back to the Isle of N'Gasta. As with "Retrieve N'Gasta's Amulet," the first step is to reach the end of the Spine and pay the boatman his fare to cross the sea. Arriving on the Isle, Cyrus can pass through the Necropolis and make his way directly to N'Gasta's Tower. The gate which before was closed will open, the dark worm beckoning the young Redguard to come forth. Entering the Tower, Cyrus faces off against two of N'Gasta's servants; the Vermai. Their clawing attacks have great reach and do 10 points of damage that cannot be blocked or parried against. However, they in turn cannot defend against Cyrus's attacks and with careful maneuvering can even be tricked into falling into the central pit, killing them instantly. However they are dealt with, Cyrus needs to make his way to the upper level, which will prove difficult given the broken staircase. In one room contains the skeletal remains of some unfortunate victim, but nothing of use. In the other, a room lined with bookcases of necromancer trinkets and tomes, and a pot containing some mysterious yellow liquid. On the table with a large red gem can be found a empty glass vial which Cyrus may take to fill with the elixir. Approaching the central pit, Cyrus may pour the contents of the vial into it, creating an explosive reaction. Backing up and with a well-timed jump, Cyrus can use the eruption to propel himself upwards and onto the staircase.

The path is straight forward from here; up. Reaching the final room, the door closes behind Cyrus. Here Iszara can be found, seemingly confined to a lucid state and entirely unresponsive. Suddenly, N'Gasta appears from the ether, cackling wickedly. Here, the dark worm reveals his intentions: that he took Iszara's soul in exchange for resurrecting prince A'Tor and gave her over to his patron, the child-god of the Morningstar and the Prince of Bargains, lord Clavicus Vile. However, he reneged on his deal and instead took A'Tor's soul gem and fashioned it into an amulet for governor Richton; the very amulet Cyrus delivered to him earlier. With this, the battle begins in earnest. N'Gasta is immune to physical attacks and will teleport around the room casting hostile spells. However, with the Flask of Lillandril, Cyrus can adsorb the necromancer's magic and fling it back at him. After a couple times of doing this, the diabolic Sload will dissolve into a fetid puddle, either to be trapped in his own soul snare or going straight to Oblivion.

In order to enter Vile's realm, Cyrus must decipher the cryptic text within N'Gasta's spellbook which reads:

The jacinth wakes the rising sun.
and snow blankets the grass.
But night o'ertakes the mid-day sky.
and the gate is opened last.

The "jacinth...rising sun" refers to Amber and Orc's Blood. The "snowblankets...grass" refers to Unicorn Horn and Hist Sap. The "night...mid-day sky" refers to Daedra Heart and Ectoplasm. Mixing these reagents and pouring them onto the symbol in this order will open the portal to Vile's Realm.

Entering the gateway, Cyrus is met with a peculiarly idyllic landscape: a floating green island with a river running through, a bridge, and a small cabin. There is no hidden areas or loot so Cyrus might as well make his way straight to the Daedra lord himself. Sitting on a tree stump with his "dog" Barbas beside him, he congratulates Cyrus on his success and begins to pry at the Redguard's motivations, be they guilt of Hakan's murder or his choice to run away, much to his chagrin. In order to earn Clavicus's favor and talk of Iszara's soul in earnest, Cyrus must offer the Flask of Lillandril as a gift. With this, Vile is happy to discuss the terms: a game of riddles with Cyrus's soul covering the wager: Two doors and two guardians standing beside them—one who always lies and the other who always tells the truth—only one question can be asked of either one of them. This is a popular logic puzzle known as "Knights and Knaves," specifically the "Fork in the road" variant. To solve this, Cyrus must approach either of the Guardians and ask "Which Door Would the Other Say is Correct?" Regardless of which Guardian is asked this, both will respond "The left door." Because their truthful/lying natures cancel each other out, the answer will invariably be the door on the right.

A cutscene plays of Cyrus returning to the mortal realm with Iszara's soul, releases her from her catatonia, from which she immediately wakes and rushes downstairs to return to the League's Hideout. Aboard Yaeli's ship, Iszara is reluctant to reconnect with her long-gone brother. Back with the Restless League, Iszara recounts her experiances and the loss of the gem, to which Cyrus interjects and admits that the gem was given to Richton by him, unaware of it's significance. Promising to recover the soul and find a sorcerer powerful enough to bring the prince back to life, Cyrus departs for Saintsport. Iszara forgives Cyrus for his past transgressions but still admonishes him, threatening to hunt him down and kill him if he should choose to run away again. He promises not to fail her—"not like last time." 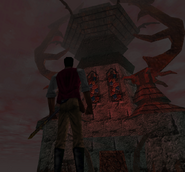 Picking up the vial

Filling up the vial

Pouring out the vial

The door closes behind Cyrus 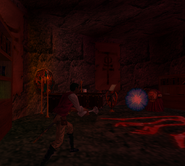 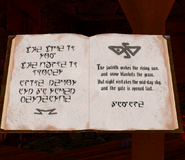 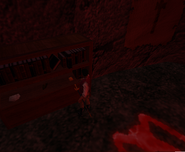 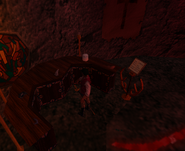 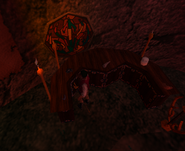 The Fields of Regret

The Restless League
Add a photo to this gallery

Retrieved from "https://elderscrolls.fandom.com/wiki/Saving_Iszara?oldid=3067924"
*Disclosure: Some of the links above are affiliate links, meaning, at no additional cost to you, Fandom will earn a commission if you click through and make a purchase. Community content is available under CC-BY-SA unless otherwise noted.