The Scamp[1] or Scamps[2] are a race of diminutive Daedra associated with the Daedric Prince Mehrunes Dagon, said to be "agile and pesky."[1] In a "hunt allegory," Scamp are called "the Hounds," while Dremora are "the Hunters," Vermai are "the Beaters" and mortals are "the Prey."[3]

Scamp are small and "not particularly intelligent,"[2] and thus don't need to worry about the inherent fear of more intelligent Daedra (such as Dremora).[3] but recognized as agile combatants who delight in cruelty just as much as any of the larger and more powerful Daedra.[2] They’re often summoned to perform simple tasks, and make good (if sometimes unruly) messengers and servants. They are able to launch fireballs from their hands and rain fire from the sky. They possess a language, but it is unknown, as the way they speak seems incomprehensible.[2]

Interestingly, the Daedric hound Barbas says he was previously a Scamp who made deals with Orcs, and a Redguard in another time. He explains that, "for now," he served as the hound of Clavicus Vile.[4] Due to their association to Dagon, the Scamp are considered Bad Daedra (that is, those who defy the authority of Almsivi, the Tribunal's godhead) within the classification of lesser Daedra. Along with them stand other two races of Mehrunes Dagon's servants, the Clannfear and the Dremora.[1]

Buttered Scamp knuckles seem to be considered "delicious" by some (namely, Sir Cadwell, who apparently received them as a gift from the Harvester Cynhamoth)[5][6] Scamp Skin is an alchemical ingredient, and its reported effects are Drain Magicka,[7] Cure Paralyzation,[7] Restore Personality,[7][8] Restore Strength,[7] Damage Magicka,[4] Resist Shock,[4] Reflect Damage,[4] and Damage Health.[4]

A Scamp (Middle) alongside a Minotaur and a Clannfear. 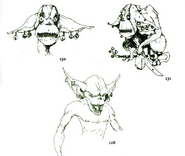 "Art of Morrowind" by Michael Kirkbride.
Add a photo to this gallery

Retrieved from "https://elderscrolls.fandom.com/wiki/Scamp?oldid=2889499"
Community content is available under CC-BY-SA unless otherwise noted.