Secunda, also known as Jone[1][2] or Shandar's Sorrow,[3] is the smaller of the two moons in orbit of Nirn, the other being Masser. The moons can easily be seen in the night sky throughout Tamriel. These two moons do not contribute anything to gameplay outside of scenery in The Elder Scrolls games, except for the fact that Secunda becomes the Bloodmoon in The Elder Scrolls III: Bloodmoon expansion of Morrowind.

Among the Khajiit, Secunda, as well as Masser, are revered because their lunar phase helps determine the forms Khajiit take at birth.

Lorkhan, "The Missing God," was sundered into two halves during his destruction, becoming both Masser and Secunda.[4] The two moons symbolize his duality, reminding his man-creations of his struggle.

"Korst Wind-Eye has told me more about the Bloodmoon Prophecy, and the signs that are foretold within. The fire from the lake of ice, the tide of dead horkers. Now the moon itself has turned blood red. He tells me that all that remains is the Hunter's Game."
―Nerevarine[src]

During the Bloodmoon Prophecy, Secunda became the Bloodmoon once every era. It is the fourth and final sign of the prophecy, as it is tainted with the blood of Hircine's crimson tides. After the prophecy ended, Secunda returned to its normal state.

Secunda (left) as seen in The Elder Scrolls: Arena.

Secunda (left) as seen in Redguard. 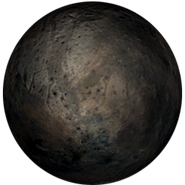 Secunda as seen in Morrowind.

Masser and Secunda as seen in Skyrim. 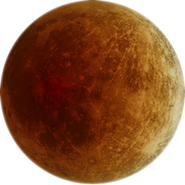 The Bloodmoon as it appears in Dawnguard.

Secunda (right) as seen in Online.

Čeština Deutsch Español Suomi Français Italiano 日本語 Polski Português Русский Українська
*Disclosure: Some of the links above are affiliate links, meaning, at no additional cost to you, Fandom will earn a commission if you click through and make a purchase. Community content is available under CC-BY-SA unless otherwise noted.
Advertisement