East of Shrine of Azura

The Stone of St. Alessia

For other uses, see Sedor.

Sedor is a fairly large, one-level Ayleid Ruin located high in the Jerall Mountains. It is the northernmost Ayleid ruin, just down the path of the Hidden Camp and west of the Shrine of Azura.

It has the typical Ayleid casks and random leveled loot, which is fairly good. Throughout the ruin are Savage Ogres who can be difficult to defeat for a low level Hero.

The Stone of St. AlessiaEdit

This is Azzans last quest for the Hero in the Fighters Guild main quest line and he would like them to recover the Stone of St. Alessia. It has been stolen from the Chapel of Talos in Bruma. 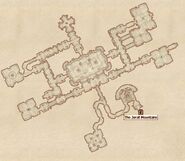 Sedor's interior
Add a photo to this gallery

Retrieved from "https://elderscrolls.fandom.com/wiki/Sedor_(Oblivion)?oldid=3065574"
*Disclosure: Some of the links above are affiliate links, meaning, at no additional cost to you, Fandom will earn a commission if you click through and make a purchase. Community content is available under CC-BY-SA unless otherwise noted.