For other uses, see Selene.

"Even by the standards of Malabal Tor, something is not right about the growth of the forest in this vicinity. It doesn't seem unhealthy—on the contrary, it seems vigorous, but in an unwholesome way."
―Selene's Web Loading Screen[src]

Selene's Web is a forest located on the southwestern edge of Reaper's March, in the province of Valenwood. Selene's Web is notorious for being one of the most dangerous regions in Valenwood and for being home to Selene, a Changeling.

During the Interregnum in 2E 582, an expedition of Mages Guild members, led by Warlock Carindon, set out into Selene's Web with the help of four adventurers. Deep within Selene's Web, the expedition encountered Selene's followers, ranging from primitive Wood Elves to hostile fauna, as well as the various forms of Selene.

Selene's followers were under the control of Treethane Kerninn. After defeating the Treethane and Longclaw, the Senche tamer of the Web, the expedition proceeded against large forces of Selene's followers and came across a barrier that took quite some time to dispel. Deep in the forest, the expedition was ambushed, leaving only Carindon and the Undaunted left. The expedition fought Selene deep in the forest as she used many of her forms including a giant spider and a Bosmeri Witch until she was ultimately defeated. Carindon captured her soul and took it back to the Mages Guild for study.[1]

During the Imperial Simulacrum in 3E 389 to 3E 399, Selene had escaped the Mages Guild sometime earlier and established a stronghold inside the forest. From there, she took the appearance of the High Priestess of Shagrath, a God of Spiders long forgotten by the denizens of Tamriel.[citation needed]

Selene's actions began to manifest throughout Valenwood, specifically near the City-State of Eldenroot—which was under the rule of Queen Ulandra. After an ultimatum was delivered from Selene to Ulandra, "...surrender Valenwood or die!", Ulandra sought a way to eradicate the woman before she could cause any more harm.

At this time, the Eternal Champion of Tamriel was seeking the third piece to the Staff of Chaos in Valenwood and sought out Ulandra's help, hoping that she knew the piece's location—the ancient Elden Grove. The queen made a deal with the Champion: Ulandra would divulge the information, only if the Champion brought the "Heart" of Selene to her to have the upper hand on Selene.

The Champion ultimately raided Selene's Web, stole the "heart," and gave it to the queen. In return, Ulandra pointed the way to the Elden Grove, the vast forest of Valenwood, where the next Staff of Chaos piece laid.[2] 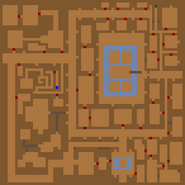 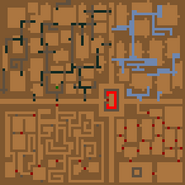 Second Level of the Web.

The "Heart" of Selene.
Add a photo to this gallery

Retrieved from "https://elderscrolls.fandom.com/wiki/Selene%27s_Web?oldid=3082858"
*Disclosure: Some of the links above are affiliate links, meaning, at no additional cost to you, Fandom will earn a commission if you click through and make a purchase. Community content is available under CC-BY-SA unless otherwise noted.