"Septimus is clever among men, but he is but an idiot child compared to the dullest of the Dwemer."
―Septimus Signus[src]

Septimus Signus is an elderly scholar living in isolation at an outpost north of the College of Winterhold.

Looking for Dwemer artifacts, he wandered out on the small glacial islands north-west of Winterhold. Here, he proceeded to attempt to access a Dwemer contraption. He was believed to be driven insane by his own genius, and the long periods away from people, although he admits reading the Elder Scrolls caused his madness.

After speaking to Paarthurnax atop the Throat of the World, the Dragonborn learns that an Elder Scroll is needed to learn Dragonrend, a powerful shout created by mortals for the purpose of knocking Dragons from the sky.

Urag gro-Shub supplies the Dragonborn with reading material on the Elder Scrolls, one of which is the book authored by Septimus. Suspecting that he is the most likely to know where an Elder Scroll may be, the Dragonborn locates him north of the College of Winterhold, at an outpost.

Once found and spoken to, he sends the Dragonborn to Alftand with a Lexicon, a device created by the Dwemer that allows one to safely transcribe the text of an Elder Scroll without going blind or insane.

Septimus believes that the Heart of Lorkhan is held within the Dwemer Oculory, but the Oghma Infinium is what is actually inside. The blood of a Dwemer is needed to open the contraption, but since there are no more Dwemer, Septimus says that the blood of every other Mer race will suffice, thus the blood of an Orsimer, a Falmer, a Bosmer, an Altmer, and a Dunmer must be collected.

Exiting the outpost reveals that Daedric Prince Hermaeus Mora seeks the object within the Dwarven Mechanism and has only tolerated Septimus' involvement with it because it served his own plot. The Dragonborn can choose to aid Hermaeus or decline the Lord's offer. Neither option directly affects the outcome of unlocking the mechanism.

Once acquiring and giving the blood samples to Septimus, he opens the contraption in his outpost and is extremely disappointed to not see the Heart of Lorkhan. He then disintegrates into a pile of ash as he approaches the Oghma Infinium. The Dragonborn can then take the Oghma Infinium. 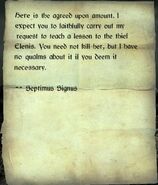 The wanted note from Septimus Signus