During the Alliance War, the Shadow Legion had affiliated itself with the various Imperial Legions across the crumbled Empire. Within Cyrodiil, its warmages and sorcerors set up encampments in the wilds to combat the forces of the three Alliances.[9] Other Imperial mages affiliated themselves with the Seventh Legion and invaded Bangkorai. These wizards would use their magical powers to summon Daedra to take over the Bangkorai Garrison,[10] and were also involved in the capture of Hallin's Stand and Onsi's Breath.[11][12]

Originally, after conqeuring the Garrison, the leader of the assault, Magus-General Septima Tharn, had arranged plans with the duke of Evermore, known as Duke Renchant, to take over the city peacefully,[13] though she did plan on enslaving the populace.[14] Duke Renchant agreed to the plan, fearing a Reachman invasion, and being ignorant of the Imperial's plans to enslave the people.[13] Upon discovering this plan, the Duke was removed from his position of power, and the original queen of the city, Queen Arzhela, took the throne.[15] Later, in a supposed parley, Septima demanded the unconditional surrender of the city. Arzhela refused, and attempted to murder the general, only to discover Septima had used an illusion to portray herself, rather than meeting the queen in person. Due to Arzhela's attempted assault, the general ordered her Seventh Legion to attack, the Imperial Battlemages ensuring their passage by creating portals.[16]

When the Imperials were being pushed back from the Bangkorai Garrison, the Imperial wizards did the best they could, originally slowing down the Covenant forces by casting firebolts at Covenant troops in the courtyard, until they were pushed back to the crypts in the garrison. The wizards held the bridge leading to the crypt, attacking Covenant forces with firebolts. Imperial Battlemage Papus, the head of the local battlemages, unleashed a Dark Anchor in a last attempt to stop the Covenant forces, only to be killed by the Vestige. The Anchor was destroyed and the Garrison liberated, with what remained of the Imperial forces being taken captive.[17]

Within Hallin's Stand, the Imperial forces kept an eye on the local populace, as the Imperial invasion was generally frowned upon. Aside from this, the battlemages did not do a lot in the settlement.[11] At Onsi's Breath, the Imperial sorcerors and soldiers were under the command of Panthius Varro, who himself was an Imperial Battlemage, too. These forces were tasked with conquering the wealthy mine, and using its resources for the arms and armor the Legion needed.[18] Due to a lack of workers, the Imperials conscripted part of the populace to work in the mines.[19] When the mining operation got sabotaged, Legion battlemages were present on the site to deal with the Vestige, who was responsible, though they were defeated. Shortly after, the commander of the Imperials got killed, and the miners entered an open revolt, attempting to rid themselves of Imperial rule.[18]

The Magus-General of the Seventh Legion, Septima Tharn would eventually meet her end in the Far Shores, the Redguard afterlife. She was hoping to raise a large army of the undead by entering the afterlife and binding the spirits to her.[20] While she was doing so, part of the Legion and its battlemages had set up camp outside the Hall of Heroes and secured the location as best they could, only to be defeated by a Covenant assault.[21]

During the late-Second Era, the Imperial Battlemages were located in the Heartlands of Cyrodiil, where they defended the Imperial City against Tiber Septim's invading army. Despite their attempts, Septim's army proved too strong a force, and the Heartlands were conquered.[22]

While most of the Legion was occupied fighting the Camoran Usurper, a pirate gang known as the Red Sabres started raiding the Abecean Sea.[23] Upon the Usurper's defeat, a Commodore by the name of Fasil Umbranox turned his attention on the pirate gang. Umbranox was provided with many resources to end the pirates, despite the heavy cost of the war against the Usurper. The Commodore slowly started to take back the hundreds of islands occupied by the Red Sabres, executing and imprisoning pirates involved with the gang. After four years, the Commodre had found Captain ap Dugal, and a naval clash took place. After many ships were sunk, only the Black Flag and Umbranox's Flagship remained intact. Umbranox had mages of the Legion on his ship, and used them during his attack on the pirates. The mages chanted a spell, and entombed the Black Flag in a cave of boulders of what had been a cliffside just a few moments before.[24]

Later in the Third Era, the Shadow Legion was recorded to have used the Battlespire, a building connecting the planes of Oblivion, for training, prior to its destruction.[25] The Legion is further located at the Arcane University, where the Battlemages serve as guards,[26] and were also said to have been housed in the Imperial Battle College, in Cheydinhal.[2] They also aided in finding out the people responsible for the murder of Emperor Uriel Septim VII.[1]

Some years before the Oblivion Crisis, members of the Shadow Legion were attempting to uncover hidden power within an Ayleid pilar. The pillar had great power, being able to strike a person dead on the spot, though it only worked outdoors. The Legion called in wizards from the Mages Guild, of which several were injured while trying to tune the stone, eventually successfully tuning it to shock magic. Through research they discovered that the only way to access the power was by having a Welkynd Stone. If done correctly, the user would obtain a powerful spell.[27] During the Oblivion Crisis, the Shadow Legion was called upon by Hieronymus Lex, a guard captain of the Imperial City, to search for the Gray Fox at the Imperial City Waterfront. Due to the Shadow Legion being charged with guard duty at the Arcane University, the Thieves Guild used this opportunity to steal Hrormir's Icestaff from the Arch-Mage's quarters.[28] Because of this, the Mages Guild ordered Captain Lex to send the Battlemages back to the University to keep it safe.[29]

During the Skyrim Civil War, battlemages were used in locations such as Helgen, where they fought against Alduin.[30] An ex-legion Battlemage, veteran of the Great War, Madena, made her home in Dawnstar.[31]

Within Cyrodiil, Imperial Necromancers are provided with the corpses of traitors and criminals, providing them with a fresh supply of corpses, most of which are young, strong, and intact.[32] Imperial Battlemages, spellswords, nightblades, and various other magical support troops are trained to use staves for combat. They are also trained in the usage of blunt weaponry.[33] 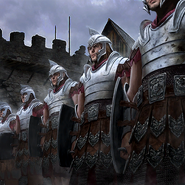 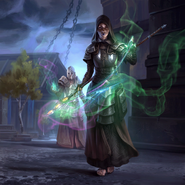 Retrieved from "https://elderscrolls.fandom.com/wiki/Shadow_Legion?oldid=3079274"
*Disclosure: Some of the links above are affiliate links, meaning, at no additional cost to you, Fandom will earn a commission if you click through and make a purchase. Community content is available under CC-BY-SA unless otherwise noted.