"On the border with Morrowind, the Shadowfen region has had more contact with Tamrielic civilization than most of Black Marsh—due primarily to the activities of the Dunmeri slavers who once operated out of the city of Stormhold. Now the Argonians are back in charge."
―Shadowfen Loading Screen[src]

Shadowfen is the northernmost zone of Black Marsh, homeland of the Argonians. The zone is bordered by Deshaan in Morrowind to the north, and Cyrodiil to the west. The Ebonheart Pact is in control of Black Marsh, but there is a large presence of the Aldmeri Dominion in the region trying to take the province, and a powerful artifact known as the Mnemic Egg, for themselves.

A fetid, rank, and treacherous mire, Shadowfen has a history of Imperial occupation and the Dunmer slave trade, and the region was often fought over between the two sides prior to the formation of the Ebonheart Pact. The Argonian Archcanon, Heita-Meen, administers Argonian affairs above the "tribal level" in Black Marsh, and is the keeper of the Hatching Pools in central Shadowfen. Although the Argonian slave trade was outlawed after the formation of the Ebonheart Pact, rogue Dunmeri slave traders, particularly from House Dres and House Telvanni, can still be found roaming the marshes.

The ancient city of Stormhold is located in Shadowfen, the source of the devastating Knahaten Flu. Shadowfen has a variety of indigenous species: Wamasu, Giant Snakes, Kothringi (extinct) and Fleshflies. Diseases such as Swamp Fever, the Droops, the Knahaten Flu and Blood Rot are common here, making Shadowfen one of the most dangerous regions in all of Tamriel. Dank foliage, murky, winding channels, Hist trees, Ayleid ruins and ruined temples can be found in large quantities in Shadowfen.

Shadowscales, Argonians born under the sign of the Shadow and sometimes taken into the Dark Brotherhood, can be found in this zone.

There are 16 Skyshards in Shadowfen, like every other zone (except for Bleakrock Isle, Bal Foyen, Stros M'Kai, Betnikh and Khenarthi's Roost, the starting areas). 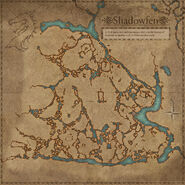 Dansk Deutsch Español Français Nederlands Polski Русский Svenska
*Disclosure: Some of the links above are affiliate links, meaning, at no additional cost to you, Fandom will earn a commission if you click through and make a purchase. Community content is available under CC-BY-SA unless otherwise noted.
Advertisement