Cave
Sharapli is a cave in The Elder Scrolls III: Morrowind.

It is a dark cave in the Ashlands region, located east of the Ghostgate, at the foot of the Ghostfence. Streams of Lava can be found inside. It is inhabited by Sixth House Dreamers, hostile creatures and a leveled Dremora. The entrance of the cave is bared by lava, making it difficult to access, unless the Nerevarine possesses levitation. In the middle section, next to a Dreamer, six bells can be found hanging across a platform. Another part of the cave has a pool of water called 'The Pool of Forgetfulness'. In the furthest area of the cave, a Sixth House shrine can be found behind a Dremora. 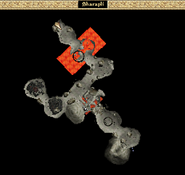 Retrieved from "https://elderscrolls.fandom.com/wiki/Sharapli?oldid=2688741"
*Disclosure: Some of the links above are affiliate links, meaning, at no additional cost to you, Fandom will earn a commission if you click through and make a purchase. Community content is available under CC-BY-SA unless otherwise noted.