The Shield of Solitude is given as a reward by Falk Firebeard upon completion of the quest "The Wolf Queen Awakened."

Equipping this shield grants the following skill bonuses, however the magnitude is based on level:

This shield is one of the few unique shields that can be disenchanted to learn a more powerful version of "Resist Magic" on the enchantment list. At level 100 Enchanting, it can provide a 25% resistance that can also be stacked with the original Resist Magic enchantment of 20%, if the Extra Effect perk has been unlocked (the original Fortify Block effect is separate, however, and won't be with the 45% magic resistance).

The shield cannot be improved at a workbench, regardless of perks chosen.

The armor, value and magnitude of the enchantment are based on the Dragonborn's level. The best possible version is available at level 40.

† The level 32–39 version has the same magnitude of enchantment as the level 25–31, instead of being 5 points higher that it should be. 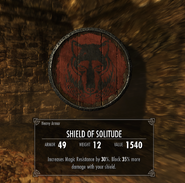 Retrieved from "https://elderscrolls.fandom.com/wiki/Shield_of_Solitude?oldid=3081021"
*Disclosure: Some of the links above are affiliate links, meaning, at no additional cost to you, Fandom will earn a commission if you click through and make a purchase. Community content is available under CC-BY-SA unless otherwise noted.