For other uses, see Shimmerene.

Shimmerene is a city on the eastern coast of the island of Summerset in The Elder Scrolls Online: Summerset. As a major port city, it has the largest population of immigrants in the Summerset Isles. In fact, debates over Queen Ayrenn's decree to allow foreigners onto the island have "dominated the conversation" within Shimmerene,[1] with many citizens being staunchly in support of[2] or opposed to[3] the relaxed borders.

Razum-dar asks the Vestige to ask three citizens of Shimmerene their opinions on Queen Ayrenn's decree to allow other races onto the island of Summerset.

A Tale of Two Mothers[]

An Altmer named Lanarie asks the Vestige to look for her missing son, Arathel, whom the authorities arrested on accounts of his alleged involvement in a plot to kill a Sapiarch.

A well-respected Mer named Halimorion was murdered by a mysterious assassin known only as the Ghost of the Green. Linwenvar asks the Vestige to help with the investigation.

Esterdel asks the Vestige to find his wife or a proof of her death.

Plaza of the Eight[]

West of the city[]

South of the city[]

View of the city from the coast 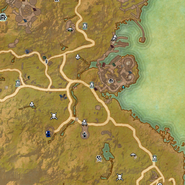