A sublocation of the Shimmerene Waterworks, the entrance to the Mother's Den is not clearly marked. It can be found on a wall facing southward in the southeastern part of the Waterworks.

The westernmost part of the waterworks, where Mirulon is located.

A Tale of Two MothersEdit

An Altmer named Lanarie asks the Vestige to look for her missing son, Arathel, whom the authorities arrested on accounts of his alleged involvement in a plot to kill a Sapiarch. A famous aprax Mother of Rats lives here.

Interior gate (decorative)
Add a photo to this gallery 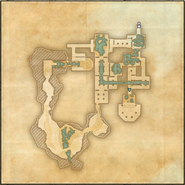 Mother's Den map
Add a photo to this gallery

Retrieved from "https://elderscrolls.fandom.com/wiki/Shimmerene_Waterworks?oldid=3040547"
*Disclosure: Some of the links above are affiliate links, meaning, at no additional cost to you, Fandom will earn a commission if you click through and make a purchase. Community content is available under CC-BY-SA unless otherwise noted.