Shunned Shipwreck is a shipwreck run aground along the western coast of the Bitter Coast region. It is southwest from the Abandoned Shack in Gnaar Mok. Like most shipwrecks found around Vvardenfell, the wreck consists of a cabin, upper level, and lower level. This wreck is mostly submerged and holds assortment of ingredients. The lower level contains several crates of Skooma and some miscellaneous Soul Gems.

This typical cabin is partially flooded and contains a wooden chest, old rotting barrel, and a cloth sack sitting on a table. A travel lantern hangs inside the door.

The upper level of the ship is mostly flooded but there is a narrow pocket of air that runs the length of the ship.

This level is completely flooded and contains a few crates and a chest. The containers' inventory is static. 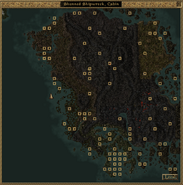 World Map
Add a photo to this gallery

Retrieved from "https://elderscrolls.fandom.com/wiki/Shunned_Shipwreck?oldid=2890797"
*Disclosure: Some of the links above are affiliate links, meaning, at no additional cost to you, Fandom will earn a commission if you click through and make a purchase. Community content is available under CC-BY-SA unless otherwise noted.