Necromancers
Undead
Slaughterfish (in the flooded part of Silorn Sedorseli)
Silorn is an Ayleid Ruin southeast of Skingrad and south of the gro-Bak Camp in the West Weald. It sits at the head of the Strid River. Sprawled across a wide area, ancillary ruins can be found near the waterfall to the west across a wooden bridge.

An impressive site, more of Silorn stands than in many Ayleid ruins and few are larger.

Common plants of the West Weald are scattered across the site with columbine and flax being most abundant. Some nightshade and viper's bugloss are there, there is even a dragon's tongue plant.

Silorn is inaccessible until the quest "Ambush" is accepted from Hannibal Traven. Inside Silorn three Varla Stones can be found, along with an enchanted Ebony Dagger which can be looted from Falcar.

The Hero must lead a battalion of Battlemages through Silorn and steal the Colossal Black Soul Gem from the Necromancers therein. 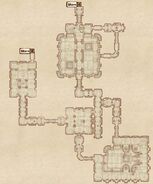 Retrieved from "https://elderscrolls.fandom.com/wiki/Silorn?oldid=2953760"
*Disclosure: Some of the links above are affiliate links, meaning, at no additional cost to you, Fandom will earn a commission if you click through and make a purchase. Community content is available under CC-BY-SA unless otherwise noted.