For other uses, see Silt Strider.

Silt Striders are giant creatures native to Morrowind. They have stilt-like legs, and a body resembling the curved and armored body of a flea. The Dunmer domesticated the gigantic arthropods long ago, using them for transportation throughout Vvardenfell. The remains of Silt Striders may be found in various parts of the Ashlands, but they are not seen alive in the wild. After the Red Mountain erupted, most Silt Striders on Vvardenfell were wiped out, but some are still believed to live on the mainland of Morrowind.

Each Silt Strider has a driver, or caravaneer, that navigates the Silt Strider to its destination. Prices for passage are dependent on the destination, embarking point, and disposition of the caravener to the passenger, which can be increased with successful Admiration or Bribes. Caravaners may have extended dialogue options concerning their cities and its surroundings. All caravaners in Morrowind are Dunmer. Silt Strider routes travel inland in the Ascadian Isles, West Gash, and Ashlands regions.

The 20 meter tall creatures' shells are cut away both to expose sensitive tissues beneath, which can be goaded with minimal force to guide them, and to make room for passengers and cargo. Silt Striders ship cargo, as evidenced by the Silt Strider docks constructed in cities such Gnisis and Molag Mar to aid in the loading and unloading of trade goods.

Silt Striders are not hostile and cannot be attacked.

There are routes between each group of towns with the same colored background, and between towns of different backgrounds that are adjacent on the chart. 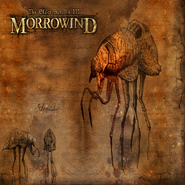 A Silt Strider as seen on a loading screen

A Silt Strider on Solstheim

From The Elder Scrolls Online: Morrowind

Deutsch Español Français Nederlands Polski Русский Українська
*Disclosure: Some of the links above are affiliate links, meaning, at no additional cost to you, Fandom will earn a commission if you click through and make a purchase. Community content is available under CC-BY-SA unless otherwise noted.
Advertisement