"The ruins of Silumm are the westernmost known Ayleid settlement in Tamriel. Abandoned early in the First Era, Silumm was occupied again during the brief height of the Direnni Hagemony, before being left once more to the erosion of time."
―Loading Screen[src]

Silumm is an Ayleid Ruin that appears on the western coast of Glenumbra, High Rock, north of the city of Daggerfall. It is the most western known Ayleid settlement in Tamriel.

Silumm was abandoned sometime in the First Era, but was briefly occupied during the rule of Direnni Hegemony.[1] During the Interregnum in the Second Era the ruin is being explored by the Aldmeri Dominion forces, secretly expanding into the Daggerfall Covenant territory. The Dominion was expecting to find something useful in the ruins or at the very least establish an outpost to be used against the enemy. Dominions best armsmaster, Sincano, is part of the expedition.[2]

Some werewolves can be found using Silumm as a hideout, killing the Dominion explorers.

A high-ranking member of the Mages Guild, Valaste wants me to perform a task for her. The Vestige must find a ruin nearby, which Valaste says may hold a store of ancient knowledge.

Camp in the ruin 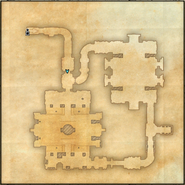