Part of Seeking Your Roots, and Master Alchemy Trainer

Sinderion is an Altmer and master alchemist residing in the basement of the West Weald Inn in Skingrad. Among his studies, he is working on a rare root, known as Nirnroot. With help gathering enough of the rare plant, Sinderion is able to craft equally rare and powerful potions.

Discovering a Nirnroot anywhere in Cyrodiil prompts the Hero to locate an Alchemist to uncover the secrets of this odd plant. Any alchemist will refer the Hero to Sinderion, who sends them on a mission to collect large quantities of the root. In return, he supplies them with varying levels of the potion Elixir of Exploration.

Sinderion is the Master Alchemy trainer. Once the Hero reaches Expert level in Alchemy, Journeymen trainers refer them to Sinderion. As a connoisseur of fine wines, Sinderion requires one bottle of Tamika Vintage 399 and one of Surilie Brothers Vintage 399 before he agrees to impart his knowledge. He has no qualms about accepting stolen goods.

Sinderion serves as an alchemical merchant; given his low Mercantile skill, he is one of the more profitable merchants to trade with. However, his inventory never resets or regenerates, so he keeps every item sold to him.

Early in the Fourth Era, Sinderion met a traveler who sold him his first sample of crimson nirnroot, and he learned from the traveler of the location where more could be found; the Dwemer city of Blackreach in Skyrim. Packing up his belongings, he traveled there and established a starting base at a farm of one of his old apprentices, Avrusa Sarethi. After some time, he traveled to Blackreach to collect the crimson nirnroot, staying in a Dwarven house in Blackreach, but was killed by the denizens there, after only obtaining one sample for his research. Picking a crimson nirnroot while in Blackreach will start the quest "A Return To Your Roots," where 30 are needed to be given to his apprentice, Avrusa. After learning of his death, she states that she will continue his study of nirnroot and crimson nirnroot in his memory. 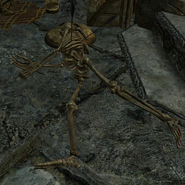 Sinderion's laboratory in Blackreach.
Add a photo to this gallery

Retrieved from "https://elderscrolls.fandom.com/wiki/Sinderion?oldid=3070309"
*Disclosure: Some of the links above are affiliate links, meaning, at no additional cost to you, Fandom will earn a commission if you click through and make a purchase. Community content is available under CC-BY-SA unless otherwise noted.