For other uses, see Skills.

Skills represent the ability of characters to perform actions in the game. There are 18 skills in total and the development of each is tracked separately. Skill points are a measure of how proficient the Dragonborn (or any other character in the world) is at these skills. Increasing them not only improves the actions performed (e.g., more points in the One-Handed skill increase the damage done in attack actions using such weapons, and a higher Lockpicking skill makes the lockpicking minigame easier) but also grants access to perks that may be learned upon leveling up. Also, when a certain level is reached in some skills, guards and other NPCs will comment on it.

All 18 skills can be grouped into 3 distinct categories based on the three guardian signs (shown in order, 3 of them are located ambiguously between the signs):

The level of a given skill is increased as the skill is used successfully - Archery is increased when an arrow hits its target; Destruction is increased when a spell causes damage to the target; Sneak increases when the Dragonborn remains undetected in Sneak mode while in range of NPCs who otherwise could detect them, etc. Conjuration increases a little bit each time the Dragonborn summons a Bound Weapon or creature, for example an Atronach. However, most skills must be used in combat in order to gain the increase.

Some skills, specifically Lockpicking, can increase when an attempt to pick a lock is unsuccessful (when a lockpick breaks). Crafting skills (Alchemy, Enchanting and Smithing), of course, increase mostly by crafting items.

When taken from an in-character context, the idea is that "practice makes the master." Each release of a bow, swing of a sword, spell cast successfully, lock picked, etc. makes the character more "skilled" (experienced). While the impact of learning is always more visible at the beginning (i.e., less experience is needed for a skill increase when your skill level is still low), difficult actions require experts or even masters to perform them.

Another way to raise a skill is picking up and reading skill books located in the game. This can be done once per book.

Increasing skills is key to the character development. When the Dragonborn reaches a pre-specified value of skill increases, they level up. However, most of the opponents in the game are tied to the Dragonborn's experience level (in other words, they also level up when you do), therefore it is advisable to employ a bit of strategy (forward-thinking) when selecting which skills to improve.

The effort required to level up a given skill increases with the current level of that skill. Generally, using a more advanced feature of a skill, such as an adept spell, advances the skill more than a novice feature or spell.

Contrary to Oblivion, it is not possible to have very skilled low level characters. Every skill increase counts for the level-ups, and the increases of skills of already high level count even more.

The use of potions, enchanted items and some active effects can temporarily increase the level of a skill, in the sense that the enhanced skill level is used when calculating the impact. Even though the enhancements are visible in the impact (e.g., a potion is better if created while the Alchemy skill is fortified), they are disregarded when the skill requirement for learning a new perk is checked (i.e., a base skill score of 30 is needed to learn Dwarven Smithing.

Perks are cornerstones of character development, enabling some new actions (e.g., crafting a type of armors and weapons such as Dwarven), providing significant boosts to some actions (e.g., +20% damage with a type of weapons) or negating restrictions or penalties (e.g., equipped armor is considered weightless). Of course, there are more perks to choose from than points available (at least until very high levels), so which perks to pick is also a question of strategy.

Perks are very useful but not necessary. One example is the Lockpicking skill tree, where all perks can be avoided - the lockpicking minigame is harder without them but it is still possible to open any lock that does not require a key. In general, tactical creativity, potions, smithing and enchantments can also greatly improve effectiveness, so it is not impossible to play with very few perks - or none at all. 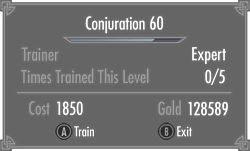 As in previous Elder Scrolls titles, the Dragonborn can pay certain NPCs for training. Each training session provides a single level up for a particular skill and the Dragonborn can train at most five times per character level. Unlike Oblivion, master trainers in Skyrim cannot advance a Dragonborn's skills beyond level 90. The cost of training grows as the Dragonborn's current skill level increases.

Legendary skills is a mechanic introduced in The Elder Scrolls V: Skyrim with patch 1.9. Prior to this patch, the maximum level of a character was 81 without console commands (cheats). The patch allows the player to reset one or more skills, thereby the character can gain additional skill increases leading to level ups and more points that can be spent on perks.

Once a skill has reached 100, it can be made "Legendary." This resets the skill back to level 15, and refunds any Perk points that were spent in that skill tree.[1] The dragon symbol, commonly associated with the Imperial Legion, will be displayed under the skill's name, indicating that it has been made Legendary, and a number appears beside it to track how many times this has occurred.

Legendary skills level up normally, and have no added benefits compared with non-Legendary skills. When a Legendary skill is mastered, it can be made Legendary again. This effectively removes any level cap, since the player can continue to maximize then reset skills an infinite number of times. It also allows them to level using only a small number of skills, so they can level while ignoring unwanted skills or focus on easily leveled skills for faster level gain.

It is generally inadvisable to make core combat skills Legendary. For instance, a character whose primary means of attack is with bows will find themselves severely handicapped by making Archery legendary. One should also take into account the ease of leveling various skills.

In order to gain all 251 perks available, a skill must be made Legendary a total of 146 times, or between 8–9 times for each skill, if starting at level 81. While there is no maximum level cap, reaching level 252 is sufficient to gain all perks. The math used to reach this answer can be seen below:

Note: DLC not accounted for

Čeština Deutsch Español Français Italiano 日本語 Nederlands Português Русский Українська
*Disclosure: Some of the links above are affiliate links, meaning, at no additional cost to you, Fandom will earn a commission if you click through and make a purchase. Community content is available under CC-BY-SA unless otherwise noted.
Advertisement