For other uses, see Skull of Corruption.

"The world will be better off with this foul thing gone from it."
―Martin Septim[src]

The Skull of Corruption is a staff that is a Daedric Artifact of the Prince of Dreams, Vaermina, and creates a double of the target. This "corrupted double" then attacks the opponent. The corrupted double remains active only for about 20–30 seconds.

The Skull of Corruption can be recharged like any normal staff via soul gems.

The staff is a reward for the completion of this quest.

Blood of the Daedra[edit | edit source]

The staff can be given to Martin Septim in order to open the portal to Mankar Camoran's Paradise. 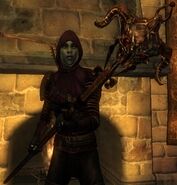 Retrieved from "https://elderscrolls.fandom.com/wiki/Skull_of_Corruption_(Oblivion)?oldid=2960597"
*Disclosure: Some of the links above are affiliate links, meaning, at no additional cost to you, Fandom will earn a commission if you click through and make a purchase. Community content is available under CC-BY-SA unless otherwise noted.