For other uses, see Skyforge.

The Skyforge is an ancient forge located next to Jorrvaskr in Whiterun, said to be even older than the Elves themselves.[1]

"Nobody knows who built the Skyforge, where the Companions' weapons are made. Its discovery led to the building of Jorrvaskr and the Companions as we know them today."
―Loading Screens[src]

The Skyforge was first discovered by Jeek of the River and his crew who were traveling south from Hsaarik Head to settle. They scouted the area later named Whiterun Hold and found a mysterious structure that was described as "a monument of a bird whose eyes and beak were opened in flame." It was discovered that the monument was feared by the native Elves and suspecting that it held great power, Jeek and his crew settled and built Jorrvaskr at the foot of the Skyforge, so it would provide their steel.[1]

Under the Skyforge is "The Underforge," where The Circle holds its meetings and worships Hircine. There is also a passage to the right of the stone bowl that leads to a secret one-way exit out of the city. It is here that the Dragonborn is inducted into the Circle by a blood ritual involving Aela the Huntress and Skjor, thus gaining the ability to transform into a werewolf.

The forge is used mainly by Eorlund Gray-Mane to craft armor and weapons for The Companions. He also sells various Skyforge weapons. Completing the quest "Proving Honor" will allow the Dragonborn to receive a free Skyforged weapon of their choice, handcrafted by Eorlund. After completing the quest "Glory of the Dead," Nord Hero Weapons and Ancient Nord Armor can be crafted at the Skyforge.

The Skyforge can be used as a regular forge with the additional option of forging Nord Hero Weapons and Ancient Nord Armor after completing The Companions' questline. The options to craft these items will show up in the "Draugr" and "Daedric" subsections, respectively. Skyforge Steel is available for purchase from Eorlund after completing Proving Honor, but cannot be forged by the player.

The Skyforge itself can be used as a regular forge; however, the location does not contain a tanning rack, workbench, or a smelter, though all three of these implements can be found elsewhere in Whiterun. 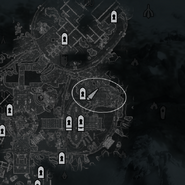 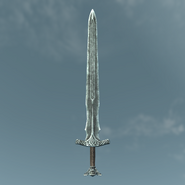 Eorlund Gray-Mane at the Skyforge.