For the original game, see The Elder Scrolls V: Skyrim.

Skyrim Very Special Edition is a 2018 audio-focused version of the 2011 game The Elder Scrolls V: Skyrim, the fifth installment of The Elder Scrolls series. It was released for the Amazon Alexa on June 10th, 2018.

"Bethesda Game Studios is proud to present Skyrim... for Alexa. Yes, that's right, the version of Skyrim you never saw coming has finally arrived on the platform you never asked for."
―Bethesda Softworks

Skyrim Very Special Edition is a voice-based adventure. Players can chose between paths to travel on and have access to four combat actions; attack with a weapon, use magic, use shouts, or flee. The game itself is based on completing various quests for characters such as "scholarly Orcs" and "Redguard Bakers."

In an interview with Rooster Teeth on 14 June 2018, Pete Hines stated the following about the game's development:

"It started as a joke, as most Todd Howard ideas do. It started off as a very simple thing, and then suddenly blossomed into this much more complicated but still awesome [thing]. Like, let's do a joke, and be really self-aware about what else we're bringing Skyrim on, and let's do it on Alexa, and we'll joke about these other things. But actually it turns out we could also just make a Skyrim Alexa game, so let's just do that. Like, okay, why? Yeah, because it's fun, and it's funny, and because we can, and so we did." 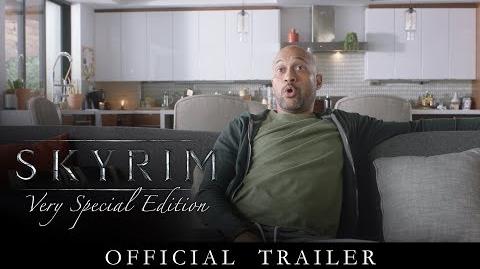 Italiano Polski
*Disclosure: Some of the links above are affiliate links, meaning, at no additional cost to you, Fandom will earn a commission if you click through and make a purchase. Community content is available under CC-BY-SA unless otherwise noted.
Advertisement