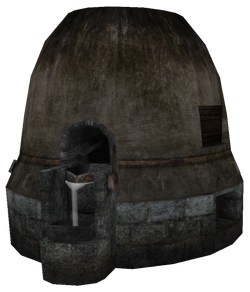 A Smelter is a crafting facility found in The Elder Scrolls V: Skyrim.

Smelters are used to smelt ores and certain Dwemer objects into ingots. They are dark colored and dome-shaped, often found near mine entrances and in some cities. Smelting does not raise smithing abilities.

In Hearthfire, the Dragonborn can install up to two smelters in each of the new homesteads; one outside and one in the cellar. Each requires following resources:

Retrieved from "https://elderscrolls.fandom.com/wiki/Smelter?oldid=3139090"
*Disclosure: Some of the links above are affiliate links, meaning, at no additional cost to you, Fandom will earn a commission if you click through and make a purchase. Community content is available under CC-BY-SA unless otherwise noted.