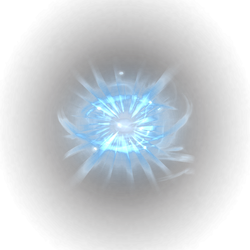 For other uses, see Spell Absorption.

Spell Absorption is a magical effect in The Elder Scrolls V: Skyrim.

The effect cannot be acquired like most other enchanting effects; rather, Spell Absorption works as passive ability that has a percentage chance of triggering.

If triggered, it will negate all damage from any incoming spells, scrolls, weapon enchantments, dragons' breath, or shouts. If the hostile magic effect had a casting cost, Spell Absorption will also Restore Magicka equal to the base cost of that magic effect. It also works against diseases that the Dragonborn can contract, as well as venomous attacks and other poisons, without conferring any Magicka.

Some in-game descriptions (e.g. on the The Atronach Stone, and items dropped by Miraak) of Spell Absorption are incorrect, and suggest that it always absorbs X% of a hostile effect; in reality, it is an X% chance to absorb 100% of the effect. If it does not trigger, it does nothing.

Unlike other magical resistances that cap at 85%, Spell Absorption has no cap and can surpass 100%.

Spell absorption can only be obtained from six sources; however, they can be stacked.

100% spell absorption can make a character immune to almost all types of magical attacks. Complete immunity can be achieved in a number of ways:

A temporary 100% spell absorption can be achieved for a Breton simply by choosing the Atronach Stone (50%) and activating their racial power, Dragonskin (50%), but only for 60 seconds.

Ward Absorb can also push the 80% permanent spell absorption to 105%, but only while the ward is active, and only in the direction the ward is facing. This can be done with the low-magicka-cost Lesser Ward, or Spellbreaker for cheap, total spell absorption.

Using any of the above techniques in conjunction with the Dragonhide Alteration spell or Bones of the Earth All-Maker power, which negates 80% of physical damage, makes a character almost immune to damage.

A vampire taking the Necromage perk before taking both Atronach perk (37.5%) and Atronach Stone (62.5%) can reach a permanent 100% spell absorption.

Achieving 80% spell absorption, instead of the highest possible amount, might be beneficial if one wants to use spells from all schools of magic and still be able to use conjuration. When the Conjuration level reaches 100, all spells of that school will cost less. In this way, Conjuration spells can be used as a means to regenerate magicka, since when the spell is absorbed, it will give the player magicka equal to the base cost of the spell. The missing 20% spell absorption is preferred in this case, because there will still be a small chance of using master-level conjuration spells. It is also possible to deactivate the Atronach Stone to use any master-level conjuration spell, then reactivate the stone.

See more discussions >
Retrieved from "https://elderscrolls.fandom.com/wiki/Spell_Absorption_(Skyrim)?oldid=3071819"
*Disclosure: Some of the links above are affiliate links, meaning, at no additional cost to you, Fandom will earn a commission if you click through and make a purchase. Community content is available under CC-BY-SA unless otherwise noted.