For other uses, see Spriggan.

"Little is known of the mysterious Spriggans, save that they revere Skyrim's forested regions, and will defend these regions with their lives."
―Loading Screen[src]

The Spriggan is a creature that can be found across Skyrim. Spriggans can usually be found underground in caves, or in dense forests. They appear more tree-like than they did in Oblivion, where they looked more humanoid.

Spriggans are entirely composed of wood and magical energy, the source of which is their taproot. Spriggans are attracted to taproot, and Hagravens manipulate this weakness by hanging taproots from trees to attract spriggans. Hagravens then sacrifice them for their magical characteristics, and because of their hatred of nature.

Some spriggans may be encountered hiding in trees, and step from them when the Dragonborn comes too close. To overcome this, all spriggans may be found with the Aura Whisper Dragon Shout or the Detect Life spell.

Like hagravens, spriggans are adept at both magical and physical combat. They have the ability to use the Invisibility spell, heal themselves quickly when low on health, and attack their target with a unique novice Destruction spell in the form of swarm of bees which can poison their target. Even in close quarters, they can also pose a fatal threat: they can swipe at the Dragonborn with their claw-like appendages, which can also poison.

Their most notable ability is their tendency to enthrall the nearby wildlife – including animals not normally hostile like deer, goats and foxes – to come to their aid. Summoned animals bear a distinct green aura and the effect cannot be overridden by the Animal Allegiance shout or the Command Animal power. It can however be countered with Kyne's Peace or prevented altogether with the Voice of the Sky effect from reading the etched tablets on the Seven Thousand Steps. Alternatively, with a maxed-out Illusion skill, Master of the Mind allows the Dragonborn to seize control of enthralled entities and turn them against their masters. After casting this spell they become invisible for 5 seconds, but the invisibility can be broken by being attacked. The animals remain enthralled even after the spriggan is defeated.

A stronger variant of the spriggan that typically serves as a mini-boss level creature, but they will also replace spriggans in some areas if the Dragonborn is of a high enough level.

The strongest boss level spriggan added with Dawnguard. This variant is most likely to hang back and enthrall animals, and often runs when at low health.

A variant of spriggan that roams the ashlands of Solstheim in Dragonborn. 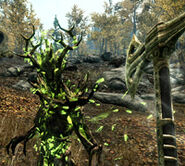 Close up of a Spriggan. 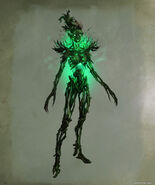