Giants
Steamcrag Camp is a giant's encampment found in The Elder Scrolls V: Skyrim. The camp is located south-east of Windhelm. According to an Official Warning stuck to the nearby sign post, the giant residing here has been given leave to keep his camp, however citizens should stay clear and not to disturb him.

Kill a problematic giant for the local Jarl. 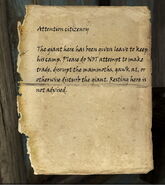 A note found near the camp.

Steamcrag mammoths and a giant near their camp.

A dragon flying near the camp.