Steel Plate Armor is a set of heavy armor in The Elder Scrolls V: Skyrim. Steel Plate armor, chitin heavy armorDR and Nordic carved armorDR are the only heavy armor sets that can be crafted by obtaining the perks for the light armor side of the Smithing skill tree.

Unenchanted pieces of armor will begin to appear throughout Skyrim at level 18 and enchanted variants can be found at level 19. These locations include:

Steel Plate Armor requires a Smithing level of 50 and the Advanced Armors perk to create. Pieces can be forged at a blacksmith's forge with the following components:

Pieces can be upgraded with a Corundum ingot at a workbench, and also benefits from the Advanced Armors perk, which doubles the improvement. 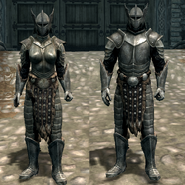 Deutsch Français Русский
*Disclosure: Some of the links above are affiliate links, meaning, at no additional cost to you, Fandom will earn a commission if you click through and make a purchase. Community content is available under CC-BY-SA unless otherwise noted.