For other uses, see Storm Atronach.

Storm Atronachs are a form of Daedra that can be summoned using the spell Conjure Storm Atronach or the Staff of the Storm Atronach. They can be found in the wilds, and are also commonly summoned by Dragon Priests, giving them a powerful minion. There are two types, the other being a Storm Thrall, which is a master level Conjuration spell.

Similar to a Flame Atronach, Storm Atronachs move about by hovering above the ground. They can traverse over water, and are slightly faster than Frost Atronachs. They are perhaps the least humanoid of Atronachs, appearing as a shattered statue with a cracked, frowning face and chunks of rock swirling about its body, loosely connected by a matrix of electric arcs and dark purple storm clouds.

Storm Atronachs attack mainly with shock spells, such as Lightning Bolt, or even Chain Lightning when facing multiple foes. Although they have much more health than either the Flame or Frost Atronachs, they tend to keep their distance in fights. Their only melee attack is a slow, simple punch with their rocky fists, but they are also surrounded by a Lightning Cloak that deals shock damage to anyone nearby.

Storm Atronachs are completely immune to shock damage and have no weaknesses. When killed, they will explode, causing shock damage.

Storm Atronachs come in a few types, though visually identical, their stats differ. 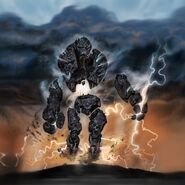 The differences between storm atronachs of the Elder Scrolls games.