"You wear the armor of the bear, my friend. A fine choice."
―Hold Guards[src]

Stormcloak Officer Armor is a set of light armor found in The Elder Scrolls V: Skyrim. This armor is typically worn by Stormcloak captains throughout Skyrim, including Galmar Stone-Fist, Hjornskar Head-Smasher and Istar Cairn-Breaker.

It can be upgraded with Leather at a workbench, though it does not benefit from any Smithing perks. This means the armor cannot be improved past flawless quality without boosting the Smithing skill over 100. This can be achieved by using enchanted items and/or blacksmithing potions to Fortify Smithing. 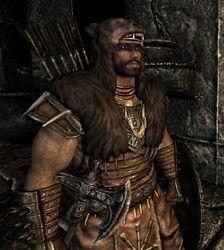 Retrieved from "https://elderscrolls.fandom.com/wiki/Stormcloak_Officer_Armor?oldid=3156635"
*Disclosure: Some of the links above are affiliate links, meaning, at no additional cost to you, Fandom will earn a commission if you click through and make a purchase. Community content is available under CC-BY-SA unless otherwise noted.