Not to be confused with Stormhold or Haven.

Stormhaven is a grassy, lowland zone in south-central High Rock. Wayrest, the capital of the Daggerfall Covenant and home to High King Emeric, is located in southern Stormhaven in the region of Menevia.[1][2]

Economically, Stormhaven is one of the wealthiest and prosperous in all of Tamriel. This is thanks to the port-city of Wayrest on the mouth of the Bjoulsae River and the head of the Iliac Bay, which receives many trading ships every day, and houses many Breton businessmen who practice their trade in Wayrest's Market District. Stormhaven also houses many rich industries, including mining, farming, fishing and hunting. A ship to and from the city of Sentinel can be caught at the docks in both Wayrest and Sentinel.[3]

Stormhaven, being in High Rock, is mostly populated by Bretons, along with a few Redguards, Orsimer, Ogres, Goblins and other races. Despite the signing of the Daggerfall Covenant, most Bretons in the region harbor a deep distrust for the Orsimer.[3]

"Situated at the head of the strategic Iliac Bay, Stormhaven is the geographic center of High Rock, and also the home of the great trading city of Wayrest, capital of the Daggerfall Covenant."
―Loading screen[src]

Thousands of years ago, an Aldmeri clan called the Direnni discovered the Adamantine Tower on the Isle of Balfiera in the Middle Merethic Era, and claimed both the tower and most of the Iliac Bay region, naming the tower the Direnni Tower in honor of the clan. For a time, they ruled all of High Rock, and at least a part of Stormhaven was part of their kingdom for virtually their entire hegemony.[4][5]

The Direnni frequently interbred with the local Nedes, so frequently that the half-elven race which inevitably resulted from these interbreedings were so numerous that it formed an entirely new race, the Bretons. The Direnni were very few in number, and established a feudal, hierarchical system to control their vast empire, which now included parts of Hammerfell and Skyrim.[5]

The Bretons became a privileged middle class within Direnni society. The Aldmer ruled High Rock for untold generations, but following their clash with the Alessian Order during the Battle of Glenumbra Moors in 1E 482, they lost control of their vast domain and retreated back to their Direnni Tower. The Elves were replaced by the Breton noble families and carried on, eventually joining the First Empire in 1E 1029 and becoming the dominant race in the province. When High Rock decided to secede from the Empire in 1E 2305, near the Empire's dissolution due to the War of Righteousness.[5]

The great cities of Alcaire and Wayrest, along with other, smaller settlements, make Stormhaven one of the two most populous regions of High Rock, the other being Glenumbra. While there is significant traffic between these two regions, Stormhaven also has strong diplomatic ties with Rivenspire to the north, despite the legacy left by King Ranser's War.[6]

In the year 2E 582, while still recovering from the destruction caused by Ranser's War fifteen years earlier, Stormhaven was blighted by a cult of Vaermina worshippers called the Supernal Dreamers.[7] What started as a few isolated incidents in Alcaire soon spread across the entirety of Stormhaven: raids, kidnappings, and rumors of Daedric pacts sent fear sweeping through the populace.[8] The Dreamers sought to spread their influence even further and eventually converge their forces on Wayrest itself, and thereby make the Daggerfall Covenant collapse by sending King Emeric himself into a waking nightmare. The cult would have succeeded if it weren't for the timely intervention of the Vestige.[9][10]

Stormhaven was also home to the Spirit Wardens, an order of Azura worshippers founded by an Orsimer named Abbot Durak,[11] who claimed to have received a vision of the Azura.[12][13] The Daedric Prince had told Durak to prepare for a time when the people of Stormhaven would be plagued with endless nightmares, and to protect Stormhaven from Vaermina and her dark plot.[14]

The following are locations accessible in Stormhaven and, with the exception of unmarked locations, are discoverable on the map. Points of Interest serve as locations with unique side quests, while cities serve as the centralised areas with multiple sublocations and act as a hub for services and merchants. Explanations of the types of locations are provided in the main locations page.

Sixteen Skyshards can be found in Stormhaven totalling in five skill points with one left over. The zone guide provides clues as to the location of each Skyshard, but many can be found simply by exploring and watching for the distinctive pillar of light they emit.

Thirty-two books that are a part of Shalidor's Library can be found in Stormhaven and added to the collection. Books that have already been found in other zones will already be marked as completed in the zone tracker.

The landscape of Stormhaven.

A settlement in Stormhaven.

The countryside of Stormhaven. 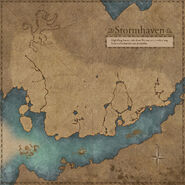 A map of Stormhaven.

Dansk Deutsch Español 日本語 Русский Svenska
*Disclosure: Some of the links above are affiliate links, meaning, at no additional cost to you, Fandom will earn a commission if you click through and make a purchase. Community content is available under CC-BY-SA unless otherwise noted.
Advertisement