For other uses, see Stros M'kai.

"One of the first landfalls settled by the Redguards when they sailed east from their lost homeland of Yokuda, the island of Stros M'Kai is now a haven for freebooters, sea-rovers, and other nautical entrepeneurs who roam the Abecean Sea."
―Stros M'Kai Loading Screen[src]

Stros M'Kai is a tiny island that lies off the southern coast of the province of Hammerfell. Pirates and smugglers find safe haven on Stros M'Kai, which is ruled by the self-appointed Headman Bhosek the Bloody. Dwemer Ruins are known to exist on the island.

Typical flora of the island. 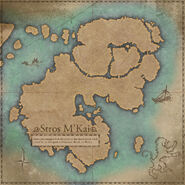 Map of Stros M'Kai.
Add a photo to this gallery

See more discussions >
Retrieved from "https://elderscrolls.fandom.com/wiki/Stros_M%27Kai_(Online)?oldid=3034125"
*Disclosure: Some of the links above are affiliate links, meaning, at no additional cost to you, Fandom will earn a commission if you click through and make a purchase. Community content is available under CC-BY-SA unless otherwise noted.