Legendary
''Summon:' Permanently Shackle another friendly creature to draw an action of your choice from your deck.'

For other uses, see Sun-in-Shadow.

Sun-in-Shadow is a creature card in The Elder Scrolls: Legends that is a part of the Houses of Morrowind expansion.

Sun-in-Shadow can be useful for finding a specific action the player requires, from Ice Storm to Tullius' Conscription to Unite the Houses. Friendly creatures that are to be shackled should have no value in attacking or have expended its usefulness, such as Black Hand Messenger or Tree Minder. 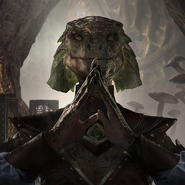 Retrieved from "https://elderscrolls.fandom.com/wiki/Sun-in-Shadow_(Legends)?oldid=2992245"
*Disclosure: Some of the links above are affiliate links, meaning, at no additional cost to you, Fandom will earn a commission if you click through and make a purchase. Community content is available under CC-BY-SA unless otherwise noted.