The Sun Birds of Alinor were large birds made out of the Sun.[UL 1] Alongside the Reman Dynasty, their expeditions to Aetherius during the Merethic Era are the most famous attempts in history. They were eventually dissolved, due to the untenable expenditures required to reach magic by magicka. The Great Orrery at Firsthold is their only legacy.[1] Altmer ships have been described as having "prows that elongate into swirling Sun-Birds,"[UL 2] and the term is seemingly also used to refer to the ships as a whole.[UL 3][UL 4]

The "Dormant Sunbird Cluster" shrub in The Elder Scrolls Online, whose base location is in Alinor and whose name references the Sun Birds of Alinor. 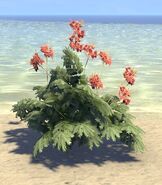 The "Blooming Sunbird" shrub in Online, also from Alinor.
Add a photo to this gallery

Notice: The following are unlicensed references. They are not copyrighted by a ZeniMax Media company, but can still be considered part of The Elder Scrolls lore and are included for completeness.
Retrieved from "https://elderscrolls.fandom.com/wiki/Sun_Birds?oldid=3099213"
*Disclosure: Some of the links above are affiliate links, meaning, at no additional cost to you, Fandom will earn a commission if you click through and make a purchase. Community content is available under CC-BY-SA unless otherwise noted.