For other uses, see Sunhold.

Sunhold is a Public Dungeon that appears in The Elder Scrolls Online: Summerset, found on the Isle of Summerset. Sunhold is the home of the Aldmeri Dominion's powerful navy, but because the Navy is fighting in the Alliance War, Sunhold was left undefended and it was captured by the Maormer. 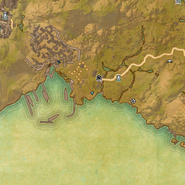 Notice: The following are unlicensed references. They are not copyrighted by a ZeniMax Media company, but can still be considered part of The Elder Scrolls lore and are included for completeness.
Retrieved from "https://elderscrolls.fandom.com/wiki/Sunhold_(Online)?oldid=3092545"
*Disclosure: Some of the links above are affiliate links, meaning, at no additional cost to you, Fandom will earn a commission if you click through and make a purchase. Community content is available under CC-BY-SA unless otherwise noted.