Crucible
Sheogorath's Court
Possible to join the Forces of Order

Duchess of Dementia
Lady of Paranoia
Priest of Order

For other uses, see Syl.

"The Duchess of Dementia. Ever wary, ever worried. A prisoner in her own House, in a way. And a delightful conversationalist, really."
―Sheogorath[src]


Syl is a Bosmer noble, Duchess of Dementia. She is highly paranoid and suspects everyone around her of plotting to kill her and take her place on the throne of Dementia.

Syl's low-cut formal gown is decorated with slaughterfish. When the Ritual of Dementia has started, she will change into Dark Seducer Armor and wield her unique warhammer, Nerveshatter.

Syl is feared and hated by her subjects. Most worry that her paranoia may lead her to act rashly and kill or torture them. Many of them want her dead because of her ongoing relationship with Thadon.

The only two she seems to trust most are Anya Herrick and Kithlan, though while both of them serve and protect her, they fear her and her paranoid behavior.

The Lady of Paranoia[edit | edit source]

After restarting Xedilian, Lord Sheogorath will ask that the Hero learn more about both Thadon's court of Mania and Syl's court of Dementia. She will ask the Hero look into the current threat on her life. She will assign Herdir to help and allow them to proceed as they see fit.

After relighting The Cold Flame of Agnon, Sheogorath will ask his champion to replace either the Duke of Mania or the Duchess of Dementia. If the Champion decides to replace Syl, they will need to follow tradition and assassinate Syl and take her heart. It should be noted that once the Hero finds Syl she will attack on sight wielding her hammer Nerveshatter.

If Thadon is picked to be replaced, Syl will become outraged to see Thadon killed and will join the Forces of Order.

The Roots of Madness[edit | edit source]

If Syl was not killed and replaced as Duchess, she will be found leading the Forces of Order underneath the throne room in the fountainhead. She will need to be killed to stop Order from overtaking.

"You've confessed to attempting to kill me, I understand. The penalty for this treachery is death, and is to be carried out immediately."

Syl: "Wait! I must speak! The Ritual must not be completed!"
Sheogorath: "Syl! You dare interrupt Me? Only I interrupt Me. Like just then. I'm speaking with someone. We'll talk later. Or not. When is later, exactly? Not now, I'm sure of that. Guards, I think Syl forgot how to use the door. Kindly show her out. Before I forget myself."
Syl: "Thadon... dead? You've done this. It was you all along!"
Sheogorath: "Hold your tongue, little Duchess, or I'll tear it from your mouth."
Syl: "Replacing Thadon with this... outsider? This is how it ends. I should have seen this coming."
Sheogorath: "Calm yourself, Syl. You're making my teeth itch. You still hold your office. I suggest you see to your duties."
Syl: "No! I see what's going on. I should have seen it before. You conspire to destroy us all! You're a fool if you think I'll allow this to happen."
Sheogorath: "Fool? Visionary! Change is in the air, Syl. Breathe it deep! Bathe in its scent! Bottle it up. Save some for later."
Syl: "Order stands at our door. They've taken the Fringe! Did you even know? Do you care? And you speak of "change"?"
Sheogorath: "Change will preserve us! It is the lifeblood of the Isles. It will move mountains! It will mount movements!"
Syl: "No. I can't do this. There has to be a way out. A way to escape."
Sheogorath: "Then go, Syl. Return to your quarters. Before I send you back in pieces."
Syl: "Yes! That's what I'll do. I'll go. The enemy of my enemy. Order is the key. I'll keep them close."
Sheogorath: "No! Let her go!"
Syl: "This is not over, Madgod. I give myself to Jyggalag. As a Priest of Order, I'll be safe. Your empire will crumble before the armies of Order." 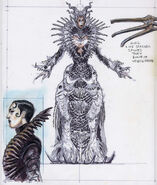 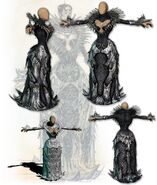 Model[source?]
Add a photo to this gallery

Retrieved from "https://elderscrolls.fandom.com/wiki/Syl_(Shivering_Isles)?oldid=3125987"
*Disclosure: Some of the links above are affiliate links, meaning, at no additional cost to you, Fandom will earn a commission if you click through and make a purchase. Community content is available under CC-BY-SA unless otherwise noted.