How the hell do you marry Grelka, just can't figure it out...i'm thane of Riften with the house now and i completed ever single Temple of Mara's quest and i'm eqiupped with amulet of Mara off course...and i'm sure i completed around 80% of quests there, but there's no option to marry Grelka...its frustrating...she's the only chick in this game i want to marry!

I'm having the same problem. I've looked everywhere, lots of people have this problem, have found no solution.

...in fact there's even no option for armor training (well and it should be since she's trainer...) as well as no option for her to follow me or help her out...

After some investigating, there's a quest item called "package for Grelka". I can only assume you find a package somewhere, or someone has it for her. I can not figure out where this is.

...i tried to put this item in my inventory via player.additem 0006a712 code (if i'm not mistaken...) but nothing changed her responses are still the same...i assume by the moment i deliver this package to her i should already have active quest activated related to it, otherwise dunno...

I'm pretty sure she just can't be married, or it's bugged. Even manually adding her to the "marriable" list doesn't bring up the dialogue. I can marry anyone else fine. Maybe they just never finished it, or it's bugged, I don't know. Guess I'm going with Mjoll :/

wow too fu*ing bad! one of the most attractive females in Skyrim and cannot be married, also disappointed about Hroki not available too...i just hate Mjoll's accent its freaking terrible...kinda puts me off her...my choice is now lies between Sylgia and Aela The Huntress...others simply do not interest me at all...:|

It's true, she's on the list, but it's possible they either prevented it, or changed it. Remember, those item names were found in the files, it can simply be left over. It's possible they made her unmarriable because she's a trainer (I don't think any other trainers are available? not sure) and a vendor. If that quest item was important, she'd probably give the quest. Until I see someone marry her or find the quest, I'm going to consider it either a bug or removed. Because even adding her to the marriage faction via console didn't work, the dialogue option doesn't come up.

its not only that she lacks marriage dialogue option, but also there's no option for training as well, despite her mentioning it!...which doesn't make much sense to me to put NPC in game, that would always mention her training and not being able to train...

I was able to train from her. Occasionally, she wouldn't have the option to sell, but backing out of the convo and trying against fixes it. Maybe she's just bugged dialogue wise..Pinworm45 (talk) 13:01, November 19, 2011 (UTC)

bugged or not it is needed to be investigated!...otherwise Bethesda wouldn't know what to fix and will miss it if it is bug and we'll be left screwed...we must make them acknowledge its existence if it is bug...

She used to be my fave merchant because I could fill her with money training and sell all my loot, but now she wont train me anymore (option doesn't show). I wonder if her being in Haelga's Bunkhouse faction has something to do with it, since I did the quest for her worker to call her out on being a whore.BMFPoochie (talk) 03:05, November 24, 2011 (UTC)

People rejoice. I have the Answer. Edit

How to Marry Grelka (PC Only)

First open the console, select Grelka, once you have selected her type the following console codes:

And your done. Congratulations for your marriage.

The reason we can't marry Grelka is that she has a quest that is never given to us. Without the quest her "relationship rank" with us doesn't increase, but with these codes you can bend her to your will. So many people were on the right track but we needed that last bit of info to get the hardest catch in Skyrim. 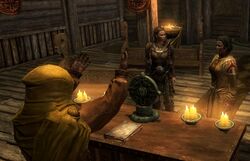 I KNEW someone would figure it out right after I got married. Married Sylgja last night and played 20 hours. Damn!

Thanks for the find though! It'll help a lot of people

Can we please flag her not marryable? Yeah, with the console you are able to marry her, but first of all that will exclude Xbox and ps3 users, and secondly following that logic, we can flag nearly every NPC as marryable.

Okay I know how to marry grelka get high level 35 talk all things with her buy 20 things from her train light armor 50 times she'll then ask to follow you on adventure say yes or no wear amulet of Mara talk to her shell want to marry you.

Why would you want to marry her, she's rude, a drunk and a racist

She is one of many I kill in every file...Nazeem, Carlotta, Sven's mother, lots of people in Solitude (I hate the Imperials) ... anybody who is rude, obnoxious...unfortunately you can't kill children or Braith would be on the list...good times  Bonnie blue-blade (talk) 02:58, January 13, 2013 (UTC)

User Rift Guard added that Grelka was meant to be married, but an unsolvable bug prevents such interaction from happening. Can someone confirm this? —Sky Above,Voice Within · Show thy Voice! 01:41, April 18, 2014 (UTC)

According to the German Skyrim wiki, Grelka is eligible for marriage after the player invests in her store. Can anyone confirm this? I would love if this were true, as I use ps3, so cannot mod it.

Retrieved from "https://elderscrolls.fandom.com/wiki/Talk:Grelka?oldid=1607349"
Community content is available under CC-BY-SA unless otherwise noted.