Armor of Tiber Septim
Boots of the Apostle

For the human that became Talos, see Tiber Septim.

"Talos says: Be strong for war. Be bold against enemies and evil, and defend the people of Tamriel."
―Ten Commands: Nine Divines

Talos, also known as Tiber Septim, Ysmir, Dragonborn, and the heir to the Seat of Sundered Kings[1], is the most important hero-god of Mankind.[2][1]

Much of his life as the mortal Tiber Septim is shrouded in legend and hearsay, but one feat is undisputed: he became the first person to successfully unite all of the nations of Tamriel under a single Empire.[1][2] Talos is worshipped as the protector and patron of just rulership and civil society,[1] and his Nordic aspect of Ysmir is also seen as the patron of questing heroes.[3]

Tiber Septim conquered all of Tamriel and founded the Third Empire and the Septim Dynasty that would rule it for centuries, marking the beginning of the Third Era.[2] Upon his death, he is believed to have ascended to godhood[4][5][6] as the most important Hero-God of Mankind.[1] The Talos Cult has since then been included in the Eight Divines of the Imperial Cult,[7] and is largely followed by members in the Imperial Legion.[8] Tiber Septim was already venerated in Nibenay prior to his death, however, since the Cult of Tiber Septim was followed in Nibenay 70 years before Tiber Septim died.[9]

One theory presumes that Talos absorbed the essences of most Dragons when he became a deity, resulting in Dragons becoming nearly extinct in the Third Era.[10] Talos' own priesthood, however, claims that his divinity was a reward from the Gods themselves upon his death,[11][12] a belief shared with some of the Nords within Skyrim.[13] A considerable number of Imperials are followers of the Talos cult, which in general is popular among soldiers of the Imperial Legion, colonists, and assimilated foreigners. They follow the cult openly, and hold a strong, and personal, connection to the cult.[14]

Talos is also referred to as the "One" in the "Eight and One". Some followers of the original Divines follow the old ways of honoring the Eight, while also giving due to Talos, the "One" who ascended.[15] The Nordic aspect of Talos, known as Ysmir, is included in the Nordic Pantheon. After Tiber Septim withstood the Voices of the Greybeards to learn one of their prophecies, many Nords could not look upon the Dragonborn without seeing a Dragon.[1]

Another aspect of Tiber Septim is known as Wulf, who appeared on Vvardenfell in 3E 427.[16] Wulf, at the time, was suspicious regarding the state of rulership in the Third Empire. He stated that both the Empire and the Emperor were old, and was uncertain how much longer the Emperor would hang on. He was suggesting a change in rulership needed to take place, and feared it could get messy.[17] This change would eventually take place with the rise of Titus Mede I.[18]

During the Third Era, Talos would take a role in history several times. During 3E 427, his avatar of Wulf appeared when the Nerevarine was on his way to defeat Dagoth Ur. Wulf offered the Nerevarine a coin, which would offer increased luck when accepted.[19]

Talos' influence would become more apparent during the Oblivion Crisis. In order to recover the Amulet of Kings from Mankar Camoran, the blood of a Divine was required. As no blood of the Eight Divines existed, the encrusted blood on the Armor of Tiber Septim was used in order to meet the requirement.[20] The divinity of Talos would provide more than just this during this time period, however. As Umaril the Unfeathered had returned to Tamriel, the next Divine Crusader had to follow the Pilgrim's Path of the Divines to speak to Pelinal Whitestrake. Talos' Wayshrine had to be prayed at, proving his divinity.[21] Likewise, where as Pelinal had failed to successfully beat Umaril due to Pelinal's limited power, the Blessing of Talos provided the Hero of Kvatch with the means to chase Umaril into the spirit realm and truly defeat him.[22][23]

During the Fourth Era, a war broke out between the Aldmeri Dominion and the Third Empire, and this war came to be called the Great War. The war concluded with the signing of the White-Gold Concordat. Two provisions in the treaty had serious impacts on what remained of the Empire, but one of the terms banned the worship of Talos.[24]

Following the Markarth Incident, the Emperor was forced to permit the Thalmor entry into Skyrim,[25] as the treaty terms had been broken due to the Empire's open acceptance of free Talos worship.[26] The Thalmor Justiciars within Skyrim were tasked with stamping out Talos worship within the land,[27] as they were treaty enforcers.[28] Due to the Talos ban being enforced, a civil war would break out within the province.[29][12] Within the city of Solitude, the shrine of Talos was removed due to the Concordat,[30] and within Whiterun, Riften and Windhelm, the priests of Talos supported Ulfric.[11][31] Many Nords within the land still revere Talos.[2] If the Stormcloaks win the civil war, Talos worship will be permitted within the province again.[32]

An Imperial Liason to the Aldmeri Dominion wrote a book in which Talos worship was outlawed due to sincere beliefs.[5] However, as a Liason, their job is to keep relations between the Empire and Dominion intact. Contrary to the claim in the book that the Empire and Thalmor want centuries of peace, it is contradicted by both members of the Legion[33][34] and the Thalmor.[27][35]

Shrine of Talos near Windhelm.

Concept art of the Shrine of Talos.

Concept art of the Amulet of Talos.

The Temple of Talos in the city of Windhelm.

The Shrine of Talos near the graveyard in Riften, Skyrim. Nura Snow-Shod, the priestess of Talos is praying in front of it. 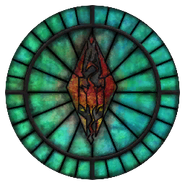 A stained glass symbol dedicated to Talos seen in chapels in The Elder Scrolls IV: Oblivion.

The Great Chapel of Talos in the city of Bruma.

A statue of Talos in the Arboretum of the Imperial City, surrounded by the other Eight Divines.

Temple of Talos near the town.

A Shrine of Talos, as seen in The Elder Scrolls V: Skyrim.

Čeština Deutsch Français Italiano Nederlands Polski Português Русский Українська
*Disclosure: Some of the links above are affiliate links, meaning, at no additional cost to you, Fandom will earn a commission if you click through and make a purchase. Community content is available under CC-BY-SA unless otherwise noted.
Advertisement