Tanval Indoril is a Dunmer pyromancer and the grandmaster of House Indoril, by extension its acting commander. He and his son Garyn are heavily involved in the Stonefalls questline.

Tanval is the father of Garyn Indoril and Grandmaster of House Indoril during the Second Era. He is also a war veteran, surviving the Akaviri invasion alongside his shield-brother, Holgunn, and was instrumental in the final defeat of the Akaviri in Stonefalls.

Known for his hard-line tactics and determination to win, Tanval believes that the ends justify the means. He is not a stranger to using unorthodox, if not otherworldly means to ensure victory for the Ebonheart Pact.

Tanval Indoril, Grandmaster of House Indoril, forms a plan to defeat the Daggerfall Covenant's invasion of Davon's Watch, and requests the Vestige's reliablity in the operation.

Tanval Indoril requests the Vestige to buy enough time to prepare a counter-attack against the Covenant invasion, and for this they are sent to fight the Covenant directly on the north beach.

Tanval Indoril sends the Vestige to Garyn, his son. Both of them must find a way to imprison Balreth once more at Ash Mountain.

Legacy of the Ancestors

"Holgunn said you were reliable. I trust his instincts. And I know there is much work to do."

Holgunn's told me about the siege. How can I help? "The Covenant closes on us like nix-hounds on a kill. They think they've already won the city. They're entirely wrong. They are doomed to the last man."

What's the plan? "You are the plan. There's a relic beneath the city guarded by spirits of my ancestors. For me to fight them would be blasphemy, but you aren't of House Indoril. The entrance is through the tombs across the square. Bring the relic here."

I'll recover the relic for you. "Enter the tomb, retrieve the relic, and return to me."

What can you tell me about the relic? "Only that you need to bring it. I tried to reason with my ancestors, but they do not understand our peril. You must succeed where I cannot."

If initiated through Tanval himself:

"I am Grandmaster Tanval Indoril, commander of House Indoril. I've heard of you. You may be of help."

What do you need me to do? "The Covenant besieges us, like nix-hounds closing in for the kill. They think they've already won the city. The fools are entirely wrong. They've only come to be destroyed."

What's the plan? "I need a certain relic, but it's protected by my ancestors. It's a sin for me to fight them. You are not Indoril, so you can enter the tombs and bring it back. The door is across the square."

I'll recover the relic for you. "Enter the tomb, retrieve the relic, and return to me."

What can you tell me about the relic? "Only that you need to bring it. I tried to reason with my ancestors, but they do not understand our peril. You must succeed where I cannot."

After retrieving the relic:

"Did you recover the relic?"

I was attacked by an enraged spirit. He said you would destroy us all. "That was one of my ancestors. He refuses to recognize the threat facing us today. It's time to turn the tables on the Covenant. For that, you must buy me some time."

"With my ancestor's skull, I have a powerful weapon―the ultimate weapon! I just need a little more time."

What do you need? "I need time to prepare the ritual that will bring this to an end. We have to delay the Covenant troops to the south."

How can I buy you some time? "Ask Holgunn. He's commanding the defense of the west gate. If you need a guide, speak to Garyn."

"Go to the west gate and help Holgunn. Garyn can show the way."

At the House Indoril Inner Crypt:

Back at the Indoril Manor:

"You have brought credit to your house. This is a great thing. House Indoril will always speak well of your actions here today."

We've won the day? "Our victory is complete. Even now the Covenant retreats. You gave me enough time to summon Balreth. As grandmaster of House Indoril, I honor you."

"Balreth has done its job. The Covenant has been driven from Davon's Watch! Now to put it back where it belongs: in the depths of Ash Mountain."

What needs to be done? "I'm not exactly sure. I made use of ancient rites and secret lore to wrench him from his cell. You saw the conclusion of my efforts. My able son Garyn even now works to return him to his slumber. He will guide your hand."

Where should I go? "You'll find Garyn west of the city, on the slopes of Ash Mountain. I sent a detachment of soldiers with him to ensure his safety. I'm certain he already knows what needs to be done."

I'll report to Garyn, then. "You've done well here, soldier. You're a credit to the Pact. I'm certain you'll be of use to my son."

Can you tell me more about Balreth? "Balreth is one of two ancient magical juggernauts, the Brothers of Strife. Their story is too long to tell now. It is enough that Balreth is a powerful weapon at our command." 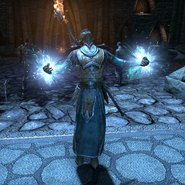 Summoning Balreth during "City Under Siege"

Retrieved from "https://elderscrolls.fandom.com/wiki/Tanval_Indoril?oldid=3035561"
*Disclosure: Some of the links above are affiliate links, meaning, at no additional cost to you, Fandom will earn a commission if you click through and make a purchase. Community content is available under CC-BY-SA unless otherwise noted.