Targe of the Blooded

Edit
watch 02:59
Wiki Targeted (Games)
Do you like this video?
Play Sound

Targe of the Blooded

When bashing, does 3 points of bleeding damage for 5 seconds

Arcane Blacksmith
The Targe of the Blooded is a unique heavy shield found in The Elder Scrolls V: Skyrim.

Its appearance is that of a basic wooden shield, adorned with large spikes and studs. The spikes on the shield inflict a wound—when an enemy is bashed—which bleeds for five seconds. The bleeding damage stacks if the target is bashed over and over. It is one of the weaker heavy shields in the game, being comparable to an iron shield, thus it seems to be intended for use as a secondary weapon while still providing some defense.

The Targe of the Blooded is carried by a hostile Redguard named Umana in the Dwemer Ruin of Alftand. She is encountered at the end of Alftand, where she begins fighting with an Imperial named Sulla Trebatius after some conversation with him. She will also attack the Dragonborn if the latter assaults either her or Sulla.

The Targe of the Blooded can be upgraded at a workbench with a steel ingot and the Arcane Blacksmith perk, though it does not benefit from any Smithing perks. This means the shield cannot be improved past flawless quality without boosting the Smithing skill over 100. This can be achieved by using enchanted items and/or blacksmithing potions to fortify Smithing.

Bashing with this shield inflicts the following penalty on the target:

It cannot be disenchanted to learn its effects.

Unlike the perk that causes bleeding damage that is inflicted by waraxes (which only effects enemies that can bleed), the Targe of the Blooded's effect also inflicts "bleeding damage" on enemies that do not bleed, such as Draugr, vampires and Dwarven Automatons. This is somewhat similar to the Ebony Mail, which poisons enemies that cannot normally be poisoned, like the aforementioned examples. The damage from continuously bashing also stacks, and continues to work if the targeted enemy is in the "bleedout" state. 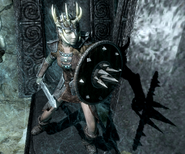 Side view of Targe of the Blooded.

Deutsch Español 日本語 Русский
*Disclosure: Some of the links above are affiliate links, meaning, at no additional cost to you, Fandom will earn a commission if you click through and make a purchase. Community content is available under CC-BY-SA unless otherwise noted.
Advertisement