For other uses, see Tel Fyr.

Tel Fyr is a Telvanni wizard tower in the region of Azura's Coast in The Elder Scrolls III: Morrowind. The island, upon which it sits, lies southwest of Sadrith Mora, just off the eastern coast near the Molag Amur region.

Tel Fyr is the Telvanni stronghold of the wizard Divayth Fyr and his daughters, who undertake scientific and magical experiments in his stronghold. He has done a great deal of work toward developing a cure for corprus disease. Tel Fyr also houses a Corprusarium where the victims of corprus can find refuge and live out the remainder of their lives in relative peace. Divayth Fyr has placed many rare treasures in the Corprusarium, and challenges adventurers and thieves to obtain them. However, the Nerevarine must not attack any of the corprus monsters or victims while inside.[1] Most notable about Tel Fyr, however, is the fact that the only living Dwemer known to exist in Tamriel resides in the Corprusarium.

The Tower is only accessible through the The Onyx Hall; from there the Hall of Fyr and the Corprusarium can be reached. 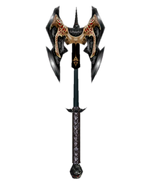 The Tel Fyr banner
Add a photo to this gallery

Retrieved from "https://elderscrolls.fandom.com/wiki/Tel_Fyr_(Morrowind)?oldid=3120254"
*Disclosure: Some of the links above are affiliate links, meaning, at no additional cost to you, Fandom will earn a commission if you click through and make a purchase. Community content is available under CC-BY-SA unless otherwise noted.