Epic
''Ward'
At the end of your turn, if Tel Vos Magister has a Ward, you gain a Ward.'

Tel Vos Magister is a creature card in The Elder Scrolls: Legends that is a part of the Houses of Morrowind expansion.

If Tel Vos Magister still has a ward at the end of the player's turn, the player will gain a personal ward that will negate any damage directed at them before breaking. As such, the player can have a ward applied to them during all of their opponents turns so long as no attack is made against Tel Vos Magister. The ward will also prevent enemy creatures from draining or activating pilfer abilities.

If Tel Vos Magister's ward is broken, it can be regained with cards such as Wardcrafter or Elixir of Deflection. Friendly creatures with guard in the same lane as Tel Vos Magister will prevent his ward from being destroyed unless targeted by actions until the guard is destroyed or otherwise neutralized. 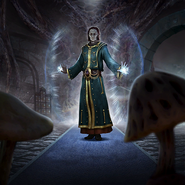 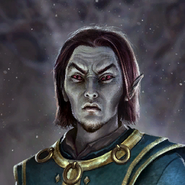 Aryon quest image.
Add a photo to this gallery

Retrieved from "https://elderscrolls.fandom.com/wiki/Tel_Vos_Magister?oldid=2992267"
*Disclosure: Some of the links above are affiliate links, meaning, at no additional cost to you, Fandom will earn a commission if you click through and make a purchase. Community content is available under CC-BY-SA unless otherwise noted.